Local, State and International Leaders Turn Their Attention to New Reactors, Both Big and Small

South Carolinian and Missourian leaders came forward this week to tout the economic benefits of new nuclear reactors, a sign of their growing support for further developing new plants in their states. The positive statements come at a time when the bidding continues to heat up for investment funds from the U.S. Department of Energy (DOE) to participate in the first public-private partnership to develop and deploy small nuclear reactors (SMRs).

Deployment of SMRs at SRS [Savannah River Site] would "offer South Carolina a unique opportunity to become a leader in the next generation of nuclear reactor manufacturing," according to a press release from the governor's office.

“We are really excited because we really do think South Carolina is where they [small reactors] should be deployed,” Smoak said. “We’re excited that the state and the governor are supporting us, too.”

The governor indicated that South Carolina “will fight for federal grants that could make the state a hub for the next-generation nuclear technology,” WRDW reports following the press conference.

I have always believed one of the great attributes of nuclear energy is the simple concept of scale: the tremendous amount of energy that can be produced by small amounts of uranium as compared to what is required of other sources of energy. In the past, the problem was nuclear power had to be generated via huge, and hugely expensive, power plants. The SMRs change that, which is why this looks like that "game changer" to me. After all, someday cities might be able to get their power from SMRs, at least in part. And surely other potential uses abound.

Citing the economic benefits that would come from participating in the demonstration project in Missouri, including creating jobs and solidifying the manufacturing base, Roper states that developing the new technology:

Will be hugely beneficial to our nation, our state, our region and the University of Missouri if it all comes to fruition.

Elsewhere in new nuclear energy news, The State (S.C.) had a great article this week on the long-term benefits already being felt in the Palmetto State from the construction of two new Westinghouse Electric Co. AP1000 nuclear reactors at the V.C. Summer Nuclear Station:

Ramping up education and tapping into specialized job training are the surest ways for Fairfield County and its 24,000 residents to reap the economic, social and civic benefits of having one of the largest construction projects in the country in its backyard, area leaders say.

Not only will the projects help to build careers for local workers, it will also enhance the communities. The article continues:

In addition to job creation, the project will increase the tax base and could lead to more economic development, broadband availability, tourism promotion and added attention to existing businesses, Vickers [the Fairfield County Chamber of Commerce president] said. 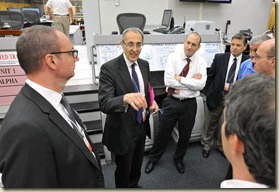 Meanwhile, further south in Georgia this week, DOE officials and the chairman of France’s Atomic Energy and Alternative Energy Commission toured the Plant Vogtle site, where two other AP1000 reactors are under construction. The French Commissioner Bernard Bigot hailed that the construction project is “a symbol of America’s reawakened nuclear program.” The Augusta Chronicle reports:

“If something is going well here, all nations benefit,” said Bernard Bigot, who toured the Burke County site Monday with U.S. Energy Department officials. “And if something is wrong, everyone shares.”

“The U.S. has been the first nation to move on with nuclear, and it has the largest fleet,” he said. “It is a time when you need to show to the public that we can move on.”

More information from Bigot’s visit, including video, is available on WRDW’s website.