Go Nuclear and Go Now – The Inescapable Message of the IPCC 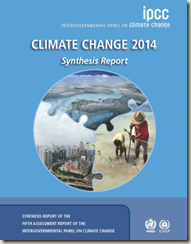 The U.N. Intergovernmental Panel on Climate Change’s 2014 report on climate change is its fourth such  report this cycle. This report synthesizes the findings of the previous three working group reports. The result can be considered hair raising if this is the kind of thing that raises your hair (assuming you have any, of course.) Here’s the summary:

Anthropogenic greenhouse gas emissions have increased since the pre-industrial era, driven largely by economic and population growth, and are now higher than ever. This has led to atmospheric concentrations of carbon dioxide, methane and nitrous oxide that are unprecedented in at least the last 800,000 years. Their effects, together with those of other anthropogenic drivers, have been detected throughout the climate system and are extremely likely to have been the dominant cause of the observed warming since the mid-20th century. [italics theirs]

What drives much of the response to the IPCC’s work is not the science, which is way above the heads of most observers, but the IPCC’s descriptions of what climate change will mean for the world. This aspect of the work depends on a lot of grim unknowns – since most of it is in the future and a lot of it is dystopic. The group’s suggestions to mitigate or prevent various dire outcomes can seem equally dire – severely disruptive of industries in place since the beginning of the industrial revolution. Even then, the report says, a lot of it may not do much good.

Adaptation can reduce the risks of climate change impacts, but there are limits to its effectiveness, especially with greater magnitudes and rates of climate change. Taking a longer-term perspective, in the context of sustainable development, increases the likelihood that more immediate adaptation actions will also enhance future options and preparedness.

Which feels like whistling a merry tune into a yawning abyss. Those that have problems with the IPCC’s reports respond less to the science than to the Cassandra-like portents of doom – which can make even its most optimistic outlooks akin to the the fateful shadow across a fortune teller’s face. “Go now – and never come back!”

Despite all this, the IPCC is the climate change gold standard and offers fairly specific recommendations on how to lower greenhouse gas emissions by various industry sectors, arrayed around a series of scenarios. It’s not surprising that nuclear energy has a role here - and what a role!

In scenarios reaching 450 ppm CO2-eq concentrations by 2100, global CO2 emissions from the energy supply sector are projected to decline over the next decade and are characterized by reductions of 90% or more below 2010 levels between 2040 and 2070. In the majority of low‐concentration stabilization scenarios (about 450 to about 500 ppm CO2-eq, at least as likely as not to limit warming to 2°C above pre-industrial levels), the share of low‐carbon electricity supply (comprising renewable energy (RE), nuclear and CCS, including BECCS) increases from the current share of approximately 30% to more than 80% by 2050, and fossil fuel power generation without CCS is phased out almost entirely by 2100.

Granted, I’m a partisan, but this is saying flatly that countries need to start putting up nuclear energy plants right now – and keep at it until the end of the century. Even if you put the prettiest bow around renewable energy and carbon capture, there really is no choice but to go nuclear and go now. If other technologies overcome their drawbacks (or make good on fusion-like promises about their own futures), great, but nuclear energy is able to mitigate climate change and keep society moving forward. And it can do all that now.

That’s a big recommendation. NEI has often promoted nuclear energy as the clean air energy – which is true – but the IPCC has given that phrase an almost existential quality.