By David Bradish December 02, 2008
Here's some food for thought ... copying from Pro Nuclear Democrats' post, check out how much one million barrels of oil looks like compared to a person and a house (see if you can find the person): 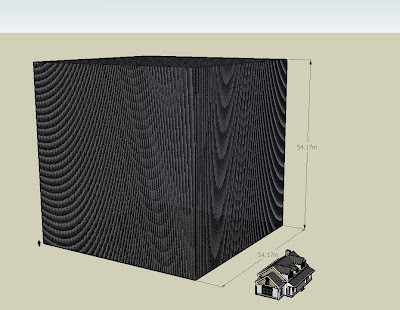 The US consumes nearly 21 of these cubes each day!

Jason Ribeiro also created a picture of what 1,600 wind turbines looks like compared to the Empire State Building: 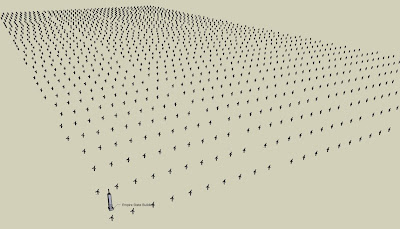 If we assume those wind turbines equal 2 MW each, then the array of wind turbines above would produce less electricity in a year than the average proposed new nuclear plant in the US.

For comparison, here's NEI's picture of what one nuclear plant looks like compared to the Pentagon and World Trade Center: 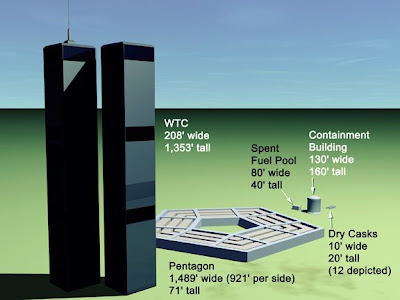 And here's the energy comparison numbers of uranium, coal, oil and gas from Cameco: 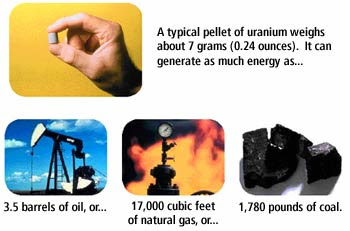 Great job on the pics Ribeiro!

Update:
After a suggestion from a fellow blogger, Jason created a picture to show how much Uranium 235 is equivalent to the energy in one million barrels of oil. Just as he notes, though, "a uranium cube represented in this model would never be assembled for use in a reactor." The uranium a light-water-reactor uses is about 3-5% U235 and 95-97% U238. 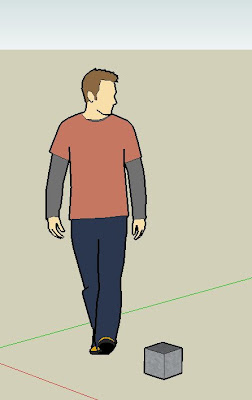 Another Update:
Luke Weston ran some of his own numbers on coal and carbon dioxide:

The volume of CO2 produced each year from coal-fired generators in the United States corresponds to a cube of CO2 with a dimension of just under 10 kilometers on a side. Over the course of a decade, that adds up to a column of CO2 which is 9.90 km on a side and occupies the entire thickness of Earth’s atmosphere.

Anonymous said…
Might be useful in pictures to show equivalent fuel usage and volume taken up per year next to each type of power plant with the same output or use some other familiar structure that people can relate to just as was done here.
December 2, 2008 at 3:24 PM

Jason Ribeiro said…
Thanks for the props David. Studying energy issues, I see a lot of numbers being thrown around, charts, and graphs, but rarely drawings, so I make my own with google sketchup to better visualize these quantities.

The 1600 wind turbines drawing has been criticized as being inaccurate because "they would never be clustered together like that"-- meaning of course they would be spread even farther apart to work well. The array is 20x40 kilometers, or 13x the land area of Manhattan. I had to crop off some turbines so the Empire State building would be somewhat recognizable at that zoom.

I agree with Anonymous that more can be done with comparisons and that's slowly in the works.
December 2, 2008 at 5:11 PM

A good start, good enough for some folks.

This doesn’t account for land used to mine coal or nuclear fuel, assuming the nuclear fuel is mined and not recycled.

Also it doesn’t account for resources for processing of raw materials into usable fuel. I’m sure that some concerned folks would be, ultimately, interested in this information too. Or maybe there’s another simpler way to make this illustration such as production cost or total cost of energy production over a 30 year period.

Mad Geo and the Tagliatelles said…
Because current nuclear designs use a subcritical steam cycle (only 32% of the heat energy is converted to electricity) they require the most cooling water of any thermal power plant design. Even dirty coal plants use less water, combined cycle plants use far less water (because 2/3 of the energy is produced using the Brayton cycle) and wind uses none. Thus, while the actual footprint of the nuke plant is small, where is all the water?
December 3, 2008 at 10:30 PM

Anonymous said…
Don't make the mistake of confusing cooling water with potable water. They are not the same. A nuclear plant may use lots of water, but not all of that is used to supply potable water. The Palo Verde plant is a good example of this.

The water is also not "used" in the sense of being unavailable in the future to the biosphere. Some of it evaporates and some is returned to the source as liquid at slightly elevated temperature. And the amount that evaporates joins the moisture already in circulation, some of which condenses as liquid water in the overall cycle of evaporation and replenishment.

Contrast that with the massive depletion of non-replaceable resources such as those used by carbon fuels combustion processes. Once you burn a cubic foot of natural gas or a gallon of gasoline, it's gone forever.
December 4, 2008 at 8:44 AM