We don’t logroll much for NEI’s advertising activities – it can take care of itself – but we liked this newspaper ad that ran in The Washington Times’ 111th Congress special section: 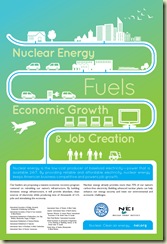 Click on the picture to see the whole thing. Basically, it makes the case that the nuclear industry represents an engine of employment, much of it union-based (the ad is co-sponsored by the Building Trades Department of the AFL-CIO), and infrastructure build out that, not coincidentally, also works towards the energy priorities enumerated by the incoming Congress and new administration.

Of course, the nuclear industry wants to be in on the financial stimulus – every significant industry stands to benefit. Nuclear has a pretty good case to make for itself, though, and the approach of this ad seems to fall right in with the mood of the public. If you dig into this Wall Street Journal/NBC poll, you’ll see that using the stimulus monies for job creation rather than tax cuts appeals to the respondents. That shows the priorities of a tough economy – people who have jobs are afraid they might lose them – and adds to the appeal of what the nuclear industry has on offer.

Government spending at this level – and this is beyond any previous level – can be an invitation to a boondoggle, and local and state officials are sensing a potential jackpot – see this story about Wilton, Connecticut and multiply it by a couple hundred thousand.

Oh! But good ad! We know that’s what we want.

DW said…
David, we have had our differences but this is an excellent ad. It's great to see the link up with the unions, ESPECIALLY my union, the IBEW, the largest operating union of nuclear power plant workers in the US (and builders too!).