By David Bradish June 26, 2009
Just wanted to bring to your attention probably one of the best, most complete, and credible sets of data on new power plant costs I've come across so far. The data comes from the Energy Information Administration's Annual Energy Outlook 2009 and the chart and table below were created by the Institute for Energy Research. The only other source I've seen that comes close to a credible comparison on cost data is Lazard (pdf).

In the past, I hardly used EIA's cost data much, partly because their capital cost estimates for nuclear were always too low (the estimates are much more realistic this edition), but mostly because they only presented their cost assumptions that feed into the NEMS model (pdf). They never showed a levelized, unsubsidized, balanced set of cost data for nearly all technologies. Here's IER's explanation of the data:

To determine the most economic technology for the type of demand (base, intermediate, or peaking load) for which new capacity is needed, NEMS competes the technologies based on the economics of their levelized costs. Levelized costs represent the present value of the total cost of building and operating a generating plant over its financial life, converted to equal annual payments and amortized over expected annual generation from an assumed duty cycle.

The table below provides the average national levelized costs for the generating technologies represented in the updated AEO2009 reference case. The values shown in the table do not include financial incentives such as state or federal tax credits, which impact the cost and the competitiveness of the technology. These incentives, however, are incorporated in the evaluation of the technologies in NEMS based on current laws and regulations in effect at the time of the modeling exercise, as well as regional differences in the cost and performance of the technology, such as labor rates and availability of wind or sun resources.

Below are IER's chart and table. I'd say the results speak for themselves. Hat tip to Charles Barton! 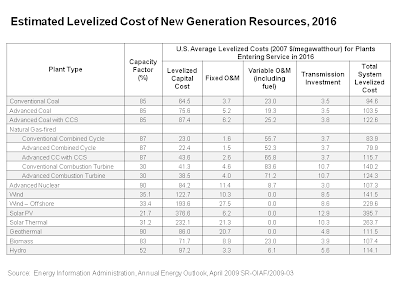 "Progress continues slowly on Federal Loan Guarantees, which will provide a lower cost source of funding but will only modestly mitigate increasing business and operating risk profile" (back to the quagmire)

A same day New York Business Wire story confirms Moody's financial analyses with Fitch Ratings taking SCANA & its subsidiaries down a credit notch because of the all-in cost uncertainty for new nukes (I mean nobody admittedly knows how much the cost overruns will most certainly be).

Fitch reports "The downgrades are driven by the financial pressure and increased business risk from SCE&G's plans to construct and finance two nuclear generating units for service in 2016 and 2019, respectively, and a decline in credit quality measures over the past 18 months."

You can't come up with a less credible source than the ratings agencies. They're done. Forget about it. After the mortgage backed security fiasco, their opinions are to be taken with a grain of salt.

They don't have the expertise to understand nuclear power and its risks, which are much more arcane and esoteric things than are MBS or CDO-squared. People who can't value default probability of a simple thing like a mortgage are now assessing nuclear power risk and projecting it decades into the future? Give me a break.
June 26, 2009 at 8:03 PM

Arvid said…
So, what lifetimes and more importantly, interest rates do the EIA use to get these numbers?

Cheaper capital, which results from loan guarantees or regulated markets, should markedly lower the cost of nuclear, and even more so wind, compared to coal and especially gas.

Anonymous said…
Kill the messenger...Just badmouthing the ratings services isn't going to get you financing.
June 29, 2009 at 11:05 AM

Anonymous said…
A rating agency worth it's salt would take a much more negative view of any firm proposing something like wind or solar generation, which, by it's nature, is a much more risky proposition than nuclear. You're talking huge capital costs for an energy source that averages in the range of 25% capacity factor. Who in their right minds would want to invest in something that in effect doesn't operate three out of every four days? Anyone who would consider constructing an income-generating asset that has 75% idle time has got to have their heads in a dark, smelly place.
June 30, 2009 at 8:54 AM