By David Bradish January 22, 2010
Mr. Elliott Negin, media director for the Union of Concerned Scientists, published the same jaded piece at Seeking Alpha and Greentech Media on how nuclear power is “Too Costly to Revive.” He begins by painting a somewhat rosy picture of the nuclear industry but then begins to dish it out by discussing the “industry’s Achilles’ heel” (cost of construction).

The nuclear industry likes to point out that it has low production costs, which it does. What it doesn't mention, however, are its rapidly escalating capital costs, those associated with paying the cost of plant construction, including financing.

Well, we like to tout the good cost numbers of nuclear and of course our critics like to point out the not-so-good numbers. So which is it? 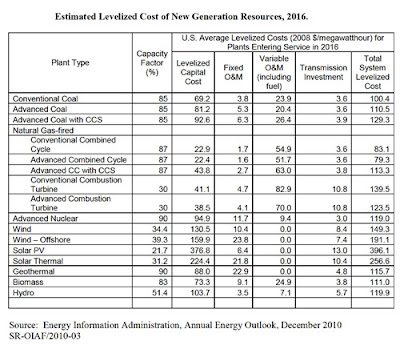 If you look at the total levelized unsubsidized costs of the emission-free technologies, nuclear is a little bit more expensive than biomass, gas w/CCS and geothermal. Nuclear comes out ahead, though, of coal w/CCS, hydro, wind and solar. The unsubsidized numbers for wind and solar do not look so pretty.

So according to at least one government source, nuclear is quite competitive. Interestingly enough, in UCS’ Blueprint report that Mr. Negin cites, UCS presents older EIA cost numbers showing nuclear is competitive as well (p. 77, pdf). It appears that Mr. Negin’s “too costly to revive” claims are undermined by UCS’ own report.

based on the industry's financial track record, the Government Accountability Office estimated that the average risk of default on a federal loan guarantee for nuclear plant construction is 50 percent.

No link was provided to the GAO report mentioned here and when looking into the GAO report UCS referenced in their Climate Blueprint study (pdf), there was no mention of a 50 percent default rate for nuclear (pdf). So where does this come from?

Fortunately, since we’ve been reading UCS’ bunk reports on nuclear for a number of years, it looks like Mr. Negin is referring to this 2008 GAO report on loan guarantees (pdf).

Unfortunately for UCS, the GAO report didn’t make any such 50 percent default claim. Here’s the only mention of the default rate in the report (page 19):

Calculated from table 6 of the Federal Credit Supplement, Fiscal Year 2009. The assumptions presented for the LGP [Loan Guarantee Program] were a default rate of 50.85 percent and a recovery rate of 50 percent, which result in a loss rate of 25.42 percent when multiplied together.

According to GAO, the 50 percent default rate applies only to the loan guarantee program, not nuclear. It gets better.

If we go to table 6 of the Federal Credit Supplement that GAO cites, we will also find in row 46 in the Excel file that the assumed default rate for the loan guarantee program is 50 percent. There’s a note, however, and the note says this about the program on row 138:

Assumptions reflect an illustrative example for informational purposes only. The assumptions will be determined at the time of execution, and will reflect the actual terms and conditions of the loan and guarantee contracts.

Wait, you mean there’s no real data behind the 50 percent default rate? It’s only an “illustrative example”? Hmm, it looks like it pretty much kills UCS’ default claims.

If UCS says it then it must be right?

Back to the UCS Media Director:

The [UCS Climate Blueprint] peer-reviewed study found that a combination of low-carbon energy polices would economically reduce carbon emissions from electricity generation 84 percent by 2030. New nuclear plants would not be an cost-effective part of the generation mix…

Aw shucks. Over here, I guess we’re laboring under the delusion that cost-effective nuclear WILL be a part of the mix. A number of EIA and EPA studies confirm it, EPRI says it and even the National Academy of Sciences agrees, not to forget President Obama and the Secretary of Energy, among others. If one is really seeking alpha (financial value), truth will come in handy.

Marcel F. Williams said…
The two best carbon neutral power plants on the chart, nuclear and biomass, could actually be complimentary systems if some of the nuclear capacity is used to manufacture hydrogen.

The oxygen produced from electrolytic hydrogen production could be used to significantly increase the electrical efficiency and reduce the capital cost of the biomass power plant while the CO2 from the biomass power plant could be synthesized with the hydrogen to produce carbon neutral: gasoline, diesel fuel, jet fuel, methanol,methane, and dimethyl ether.
January 23, 2010 at 12:46 AM

crf said…
I'd be skeptical about the costs of coal and natural gas with CCS. No one has ever built a commercial CCS coal or gas plant. CCS is dependent on geology. CCS cannot be easily retrofitted to plants. And you can build a coal plant or gas plant without CCS and it will be cheaper. For every coal plant built, its proponents will argue for not building it with CCS, because it is just "one plant" added to thousands of coal plants in the world and so will be a rounding error in reducing GHG. Coal proponents will win a large proportion of those fights.

Banking on Carbon Capture and Storage as a crucial part of carbon reductions is like playing Russian roulette with an unknown number of bullets in the chamber. It should only be a backup or side plan: the main plan should be electricity without GHG in the first plan.
January 23, 2010 at 1:02 PM

SteveK9 said…
The real answer to these critiques is going to come when Asia is completing large reactors for less than $1B. Which will proabably be the case within 15 years.
January 24, 2010 at 6:35 PM

sault said…
Do your research before you criticize others:

CBO considers the risk of default on such a loan guarantee to be very high--well above 50 percent. The key factor accounting for this risk is that we expect that the plant would be uneconomic to operate because of its high construction costs, relative to other electricity generation sources. In addition, this project would have significant technical risk because it would be the first of a new generation of nuclear plants, as well as project delay and interruption risk due to licensing and regulatory proceedings.