The Post on Yucca and Our New Favorite Tower

The Washington Post weighs in on Yucca Mountain on the editorial page:

Technology might temper some opposition; recycling or reprocessing used fuel will not decrease the amount of waste that needs to be stored -- a staggering 57,000 tons -- but it could diminish the number of years that waste remains unstable by neutralizing particularly volatile elements. But no technology will obviate the need for a long-term geologic storage facility. Taking Yucca Mountain off the table without even seeing if it meets NRC criteria is contrary to the spirit of the commission and would mark the triumph of politics over policy.

The piece was motivated by the NRC panel decision that the DOE-submitted license cannot be withdrawn from the NRC nor can the administration usurp Congress’ role in deciding whether Yucca Mountain. The editorial lays out some of the history and represents a strong vote for letting the license go forward. Do read the whole thing and see what you think.

My favorite painted cooling tower was this one at Germanys Wunderland Kalkar (click for a larger image – it’s hard to tell what it’s depicting at this size): 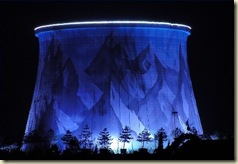 The only problem with it is that the plant it belonged to never opened.

So I needed a new favorite: 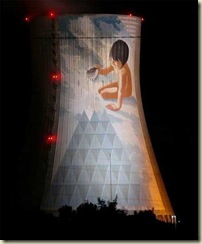 This one, at the Cruas nuclear power station in Provence, France, was created by Jean-Marie Pierret and does something especially worthy – it uses the unique shape of the cooling tower (hyperboloid) as part of its aesthetic strategy. Here’s a little more of Pierret’s work, including an image on a dam that I’ll assume (without knowing) is Neptune.

Public art at this scale has the potential to be controversial as well as delightful, of course, but I’ll go for delightful in this case, or should I say, “délicieux.”

Many more examples here. Be sure to catch the one that “paints” the tower with light – it also paints the steam.

DocForesight said…
Gentlemen -- I wonder if you've already wadded through the series of articles on nuclear power, electrified rail transport, used fuel recycling and other related topics at: www.21stcenturysciencetech.com

I found them via a post at Rod Adams' blog and find many of their articles thought-provoking. The fuel recycling would possibly reduce the need for Yucca Mtn.
July 19, 2010 at 5:10 PM

donb said…
The Washington Post stated:
recycling or reprocessing used fuel will not decrease the amount of waste that needs to be stored -- a staggering 57,000 tons -- but it could diminish the number of years that waste remains unstable by neutralizing particularly volatile elements.

Huh? Over 95% of that "waste" is U238, the same stuff that nature has scattered somewhat randomly around the plant. Not particularly hazardous, and even a bit less radioactive than the natural stuff. Sure reduces that figure of 55,000 tons a lot. Even the remaining 5% can be reduced a lot by removing what is not hazardous, and what is still fuel for current reactors.
July 19, 2010 at 5:25 PM