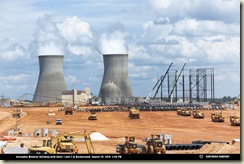 For the third time since the nuclear carnivals began, we have the privilege of hosting this week’s highlights of the pro nuclear blogs.

In no particular order, we start with Ted Rockwell at Learning About Energy who contributed a thought-provoking essay on the topsy-turvy world of nuclear energy. Here’s his synopsis:

Nuclear means being special. That brings special favors, but we soon learn that it also brings a curse that is hard to shake: no solution that would otherwise be quite adequate is ever good enough for nuclear. People are ready to believe that our competitors’ problems will soon be solved, but for nuclear, we have to promise that we’ll make each succeeding plant safer than its predecessors.

Rod Adams at Atomic Insights has been racking up the comments after challenging the regulatory system on excessive costs due to the extremely conservative linear no threshold theory:

The regulatory system in the US for nuclear energy is based on the assumption that all radiation, no matter how small the dose represents an avoidable risk. The rules push nuclear facility operators to keep doses as low as reasonably achievable, but the regulators assume a broad definition of a "reasonable" cost for reducing radiation doses.

Nuclear costs would fall if regulators recognized the science showing that there is no harm from doses that are within the normal variations in natural background radiation.

Brian Wang at Next Big Future noted how fast India is increasing its nuclear generation and exceeding its projected targets.

Dan Yurman at Idaho Samizdat reported on the delay for two new nuclear units in the Czech Republic due to lower electricity demand and possibly Germany’s decision to keep their reactors running longer.

There is no reason why much of our infrastructure needs to be quite as unattractive as some of it is. If designed right from the beginning, many facilities could be made more attractive for minimal additional cost.

Margaret Harding at ANS Nuclear Cafe explained the spaghetti of regulations among five different departments regarding nuclear export control. In order to reduce this complexity, Margaret referenced Defense Secretary Gates’ proposal to create a single list, single agency and single IT infrastructure to manage the process.

Charles Barton at Nuclear Green pointed out the number of cost savings that can be achieved from small and advanced reactors.

Steve Aplin at Canadian Energy Issues discussed another go at building new nuclear at Darlington in order to replace 6,000 MW of coal. Aplin pointed out how history has proved that when decision-makers take bogus ideas like Amory Lovins’ ‘negawatts’ seriously, the result is skyrocketing greenhouse gas emissions and a stagnant job market.

As the details of all loan guarantees are proprietary, Caperton has no knowledge of the financial protections included in any given transactions, and thus no basis to evaluate whether a credit subsidy cost is “correct”.

And here at NEI Nuclear Notes, Mark Flanagan pointed out that Constellation’s decision to withdraw from the Calvert Cliffs 3 project doesn’t mean the end of new nuclear.

Picture of the assembly modular building for Vogtle units 3 and 4 with units 1 and 2 in background.

Will NEI be calling for abandonment of the linear-no threshold model when NRC asks for comments on the latest ICRP radiation guidelines?
October 18, 2010 at 10:25 AM

David Bradish said…
NEI will be commenting to the NRC but it won't be for the abandonment of LNT. The ICRP hasn't changed its view of LNT so it's not like we can ask the NRC to deviate from the ICRP. In the first round of comments we submitted earlier this year, according to one of our health physicists, we agreed with the Commission that the current regulatory framework provides adequate protection of public health and safety. We also commented that the NRC should reform their standards (not just revise them), in order to establish a uniform, consolidated set of regulations. We'll be at the upcoming workshops and commenting more as this update is implemented.
October 19, 2010 at 11:55 AM