What Is “Cold Shutdown?”

First, what is cold shutdown? The U.S. Nuclear Regulatory Commission defines it as:

The term used to define a reactor coolant system at atmospheric pressure and at a temperature below 200 degrees Fahrenheit following a reactor cooldown.

In non-nuclear speak, it basically means the conditions within the nuclear reactor are such that it would be impossible for a chain reaction to occur. This term usually comes into play whenever a reactor is shut down periodically for refueling or for the final time prior to the long-term before it is decommissioned. When a reactor is in cold shutdown, the reactor pressure vessel (RPV) can be safely opened with great care and additional water is added to the cavity above the vessel for shielding to permit safe handling of the fuel for refueling (replacing depleted fuel elements) or defueling (removing the entire core). 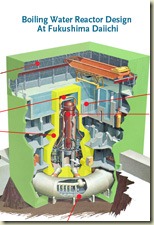 In Fukushima Daiichi’s case, achieving the strict definition of “cold shutdown” is not possible because the RPVs have been breached. This means that the RPVs will not hold water (currently the cooling water is flowing through them) and some of the melted fuel may not be in the vessel, but rather on the floor below, which is still within the primary containment. To clean up the plant, Tokyo Electric Power Company (TEPCO), the plant’s owner and operator, will work with the Japanese government and other parties to develop a long-term plan that will include removing the damaged fuel.

TEPCO understood this important nuance to achieving “cold shutdown” early on this year when it developed its initial recovery plans and developed a new term, “cold shutdown condition,” which applies to how they are bringing the reactors to stable condition. Their definition is as follows:

By their definition, the Fukushima Daiichi reactors will reach “cold shutdown condition” once they are below boiling point and are no longer releasing significant amounts of radiation into the atmosphere. This new definition, thus, has an important distinction between the more commonly used “cold shutdown,” which typically takes place at a nuclear plant under normal conditions.

Reaching “cold shutdown conditions” at Fukushima Daiichi, however, has been an extremely difficult task for TEPCO workers given the conditions at the site and is a very significant milestone in their recovery efforts. TEPCO expects to reach this condition in just a few weeks by the end of 2011.

Anonymous said…
The NRC definition is different than the Tech Spec definition of CSD. Atmospheric pressure is not a TS requirement, I hope. We'd always be in 3.0.4 the second we exceeded 1 psig.
January 2, 2012 at 10:31 PM