A Preview of CNN's Report on Vermont Yankee

By Eric McErlain February 17, 2012
For a number of weeks, we've been waiting for CNN to air an extended piece concerning the fight to keep Entergy's Vermont Yankee nuclear power plant operating -- a battle that's been thoroughly chronicled at the excellent blog, Yes Vermont Yankee. CNN has just posted a 4:40 teaser on their Web site, and if this snippet is any indication, we're in for more of the sort of alarmist reporting that's helped send the former cable news giant's ratings spinning into oblivion. 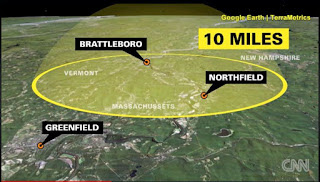 In the nuclear industry, this is actually known as the emergency planning zone or EPZ, drawn in a 10-mile radius around every nuclear power plant in America. As NEI notes in one of its fact sheets on emergency planning:


Within the 10-mile EPZ, the main immediate protective actions for the public include instructions for sheltering in place or evacuation. The slow pace at which an event may unfold—over several hours or days—provides time for orderly sheltering or evacuation, if necessary.

The nuclear industry prepares for any eventuality at its plants even though the risk of an actual accident causing any fatalities is incredibly small. Just a few weeks ago, the independent Nuclear Regulatory Commission released its State-of-the-Art Reactor Consequence Analyses or SOARCA. Its conclusions are encouraging:

Later, Lyon quoted anti-nuclear campaigner Arnie Gundersen as saying that many American nuclear plants are just one "earthquake, hurricane or flood away from disaster," backed with video of the terrible floods that plagued the state in the wake of Hurricane Irene. But what Lyon failed to mention is that even when Vermont Yankee's hometown of Brattleboro was inundated by those floods, the plant remained safe (thanks again to the precautions taken in design and construction of the plant) and continued to provide electricity to consumers as they recovered from the storm.

When it comes to extreme weather events, 2011 was something of a real-life stress test for American nuclear power facilities, with plants all over the country successfully enduring earthquakes, a hurricane, massive flooding in the Midwest and a spate of violent twisters in the Southeast. We chronicled all of this in an interactive graphic we posted on our SafetyFirst microsite back in January:

All of this information, and more, could really help provide some balance to the CNN report, which is scheduled to run at 8:00 p.m. EST on both Saturday and Sunday night. Unfortunately, for some reason, CNN never bothered calling us here at the Nuclear Energy Institute, the industry's policy arm, to ask for an interview. We've since reached out to CNN's Amber Lyon letting her know that we're available. We'll update our readers if and when we get any response.

Anonymous said…
Her first 4 words are an indication of the deception to follow. "Were here in Vermont" as she stands in Hinsdale NH looking accross the river at VT.
February 17, 2012 at 4:23 PM

Atomikrabbit said…
Does CNN take in any advertising money from the gas, oil, or coal industry?

How much from the only credible energy competition - nuclear?

Now THAT would be a case of hard-hitting investigative journalism I would be willing to watch!

Anonymous said…
CNN is the "Voice of Conventional Wisdom". And that's not a compliment, dearie.

The presenters really don't have the critical thinking skills to ask the right questions, to know what they do and don't know, to know where to get it, to distinguish between facts and CW, which they often confuse for fact. Can't do basic research that a college freshman could do.

I listen to the BBC. Good example was the Italian Ship that capsized last month. CNN had some woman on who pointed to a diagram of the ship and said "The further down these decks are the more underwater they are!" as though she had just discovered the sky was blue and had to share it. The BBC had the former master of the QE2, with forty years experience at sea, on the air.
February 19, 2012 at 10:48 PM

Anonymous said…
Those who think news coverage is controlled by who's paying the most for advertising in a given outlet have clearly never worked in a real newsroom.
February 21, 2012 at 5:48 PM