The End of Megatons to Megawatts 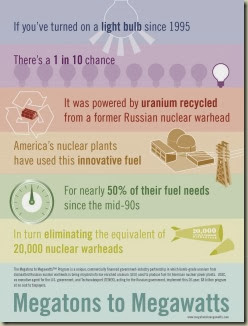 The Megatons to Megawatts Program is a unique, commercially financed government-industry partnership in which uranium from dismantled Russian nuclear warheads has been recycled to produce fuel for American nuclear power plants.  The 20-year, $8 billion program has been implemented at no cost to taxpayers and is arguably the most successful nuclear disarmament program in history. Virtually the entire U.S. nuclear reactor fleet has used this fuel.

And this has been its benefit:

Since 1995, U.S. utilities have purchased this fuel for their commercial nuclear power plants under Megatons to Megawatts, which has helped fuel approximately 10 percent of the country’s electricity during that time. Nuclear energy facilities received this fuel as part of its commercial fuel contract for low enriched uranium with USEC Inc., the U.S. executive agent for the program.

And now, the Russians have sent the last of the low enriched uranium to the United States. The AP notes it briefly:

The final shipment arrived in Baltimore this week. The shipment was loaded last month from St. Petersburg, Russia. It was the last one under a program known as Megatons to Megawatts. Energy Secretary Ernest Moniz called the program one of the most successful nuclear nonproliferation partnerships ever undertaken.

That’s putting it mildly. You could almost hear the mechanisms of the cold war disassembling.

It could have continued, but the Russians decided to end the program when the agreement expired. There was no particular given reason for this, but Russia has seen an upswing in its nuclear technology exports in recent years and it has explicitly wanted to make more money from the uranium – according to Agence France-Presse, “USEC has signed a new agreement with Russian consortium Techsnabexport, but fuel provided under the deal will be at market prices, USEC said in October.” So, in a way, it is continuing, but as a more commercial enterprise. Still, it’s 20,000 warheads that became megawatts. That’s as good a definition of Atoms for Peace as any, isn’t it?

NEI President and CEO Marv Fertel offers his thoughts on the end of Megatons to Megawatts and it legacy on NEI’s YouTube channel. Worth a look.

The great looking infographic used as the illustration above can be found – larger and printable – at the main NEI site.

jimwg said…
A worthy program whose end effect is mostly political and academic. The voter on the street isn't going to be persuaded to accept nuclear power by how many warheads evaporate but by someone showing them that Fukushima was a rare zero-causality nature-caused fluke and tout to them counter-FUD nuclear plant stats and safety records. WWIII is pretty much out of sight and mind to people today, not the same about their energy bills and whose energy camp is sincere and safest. That's the new tangible war out there and at least in the US nuclear's losing for want for fighting back.

gmax137 said…
I disagree with you on that one, Jim. I think it's a real shame that this program isn't more widely known. Outside of the rabidly vocal anti-nukes, there are alot of thoughtful and well meaning folks who oppose nuclear power that would be surprised to hear about it. It likely wouldn't change their minds, but it might put at least one item in the "plus column."
December 12, 2013 at 2:59 PM

Mitch said…
there are alot of thoughtful and well meaning folks who oppose nuclear power that would be surprised to hear about it.

Sure They know about it. Makes no difference next to Fukuishima. Ask FOE & Greenpeace. Nuclear always means death to them one way or another.

Anonymous said…
Reading the first time about the megatons to megawatts program was one of the bigger "Wow, that's great" moments for me, when I was educating myself about nuclear energy. It was one of the things that changed my mind, but then, I was halfway there already at that moment.
Still, people find it interesting to hear about it and many didn't know before. It is, at least here in the Netherlands, not well known at all.