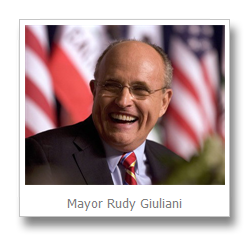 It’s a great pleasure and surprise when someone who has not said much about nuclear energy one way or another comes out strongly in favor. So here’s New York City’s former Mayor Rudy Giuliani in the Daily News:

We were recently reminded why maintaining a diverse fuel supply is so critical. The extreme cold weather that hit the city this winter caused New York City’s electricity prices to surge to record highs; customers saw their bills spike more than 20%. Many attributed the boost to rising prices for natural gas, which powers most of our electricity generators.

To protect against even more volatile price increases, we need to protect and preserve safe and stable-priced sources of power — such as the nuclear plants at Indian Point.

Electric reliability and the possibility of power outages were constant concerns of mine during my years as mayor, during the brutal winters as well as grueling, hot summer months. Our electric infrastructure is a vital part of New York — it powers our mass transit, our world-class health care, our communications, our financial markets and all the other the private-sector businesses and public organizations that drive our economy.

Given the unexpected challenges our region has faced over the past few years — from Hurricane Irene and superstorm Sandy — the mission to preserve and improve our power systems has never been more critical. We should use available federal funds to strengthen our existing electric system, and thereby offset the needed investment costs.

Most importantly, this will enable us to keep power costs under control — which is important for our region’s economic attractiveness.

A lot more at the link. He has his facts in order and, with a focus on the New York area, he has knows his beans about energy options. Very impressive op-ed from a very impressive figure.

jimwg said…
Actually Rudy's been advocating Indian Point (and Shoreham) for quite a long while, even long before 911. One of the few pols out there with the spine to come out to hawk nuclear, though regrettably is pretty much a lone wolf about it here as he's advocating in a "progressive" bastion and against a formidable the Cuomo dynasty which is hell bent on shuttering IP with very unscrupulously rabid green groups here. We really have to get a handle on challenging FUD groups and spokespeople!