Higher and Higher: EEI Uncovers The Cost of Electricity in Germany 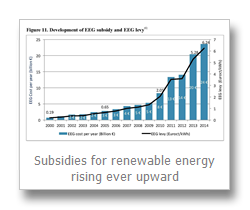 Here’s the bottom line on Germany’s drive to switch from nuclear energy to renewables:

[T]he lessons learned in Europe prove that the large-scale integration of renewable power does not provide net savings to consumers, but rather a net increase in costs to consumers and other stakeholders.

Moreover, when not properly assessed in advance, large-scale integration of renewables into the power system ultimately leads to disequilibrium in the power markets, as well as value destruction to both renewable companies and utilities, and their respective investors.

This is from a report prepared by energy consulting firm Finadvice (a Finnish company, though its web site and the report are in English) for the Edison Electric Institute and Finadvice’s European clients.

Neither EEI nor Finadvice have any particular brief for nuclear energy (in this context) and are interested in studying the transition primarily as a case study in quickly ramping up renewable energy sources. Nuclear energy is incidental to the analysis; this provides an interesting focus, though it also causes the report to miss a step here and there.

This outcome has occurred with many of the nuclear plants still operating, so these costs presumably will only go higher after the plants close in 2021. (The cost for household electricity in the U.S. is about $0.13/kWh , for comparison).

The rapid introduction of renewable energy sources has other consequences, too:

As a result, wholesale prices in Germany for baseload have fallen dramatically from €90-95/megawatt hour (MWh) in 2008 to €37/MWh in 2013. This has created a large amount of load and margin destruction for utilities that built and financed thermal plants. Many new gas-fired power plants have been rendered uneconomical, leaving owners to shore up their balance sheets by undertaking large divestitures of some of their holdings, as well as by reducing their operational costs.

Wait – shouldn’t household prices go down if wholesale costs decline? You’d think so, but there are other forces at work.

These actions, which the government intends as a way to prop up renewable energy until it can support itself, warps the cost of electricity tremendously, because it means that companies must  ramp down non-renewable plants, even when the electricity generated by them is less expensive.

Natural gas facilities takes most of the hit here, according to the report, and it’s rendering some of them unprofitable. Yet they and nuclear plants are still needed when renewable energy sources are not supplying electricity – at night and when the wind isn’t blowing.

Another factor is that Germany cannot allow electric companies to charge the full cost of electricity to industry – Germany is the largest exporter in Europe and it must remain competitive in world markets. This means that all the cost is pushed down to households. 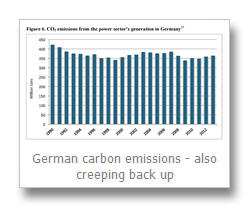 There’s a lot more to the report – it’s the most comprehensive (and most objective) view of the German situation I’ve seen. It also reconfirms every heavily biased view a nuclear advocate could possibly devise – but that’s just gravy. What it really confirms is that Germans are getting a raw deal.

Germany’s experience with renewables has often been portrayed as a success story. It undoubtedly met one of the objectives set by the EEG: the promotion of renewable generation. It remains unclear, however, how successful Germany has been in meeting the other stated goals of its renewable energy policy: mainly climate change mitigation, energy independence, reduction of fuel costs, conservation of fossil fuels, local economic development, and  expansion of the  domestic manufacturing base.

If you start promoting renewable energy by fiat, that’s going to succeed by definition. But all the rest of it? – the stuff that really empowers people and ensures a viable future? At best, the jury’s out and at worst, the jury foreman is looking at you with sad, sad eyes.

trag said…
Thank you for highlighting this article. Now if we could just get some substantial portion of the US population to at least read the summary.

Anonymous said…
If and when Germany makes the final decision to turn off its nuclear power plants, we'll really see the hit to its power situation.

In the US nuclear advocates are exposing more and more of the link between big "environmental" groups like Sierra Club and Friends of the Earth and payments from the fossil fuel industry to them.

"Follow the Money" is good advice for those seeking to understand the reason for "environmental" groups non-stop efforts to shut nuclear plants permanently. It looks like their concerns for citizen safety from nuclear is invented and bogus. The real reason is this protest pays off in dollars from fossil fuel.
March 29, 2015 at 11:51 PM