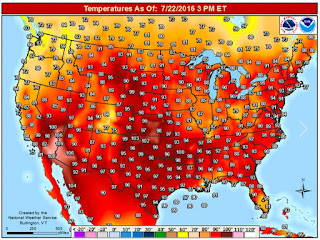 The past two weeks have seen record temperatures grip the nation as a "heat dome" has descended over most of the continental U.S. While it isn't news that summer is hot, it is when the temperatures are 15-20 degrees higher than average for this time of year.

But life must go on and the electricity must flow. Without the sort of reliable baseload power that nuclear energy provides, our electric grid would be in a tight spot, as grid operators would be forced to juggle intermittent source of energy (like wind and solar) with others that could be vulnerable to supply constraints (like natural gas). In California, the independent system operator recently asked consumers to conserve electricity in the face of high temperatures during a period where the supply of natural gas is constrained due to the Aliso Canyon methane leak.

Put it all together and you could be looking at grid reliability being compromised, prices skyrocketing and electric utilities being forced to use dirtier and less efficient means of generating electricity like coal, oil and even jet fuel. With that in mind, we've put together this short list of facts about Summer heat and electricity.

1. An Extra 20 Degrees of Summer Heat Makes a World of Difference: According to a 2012 study by OPWR, total daily electricity use was 22% higher when Summer temps rose 20 degrees above the seasonal average. In the late afternoon when electricity demand peaked, usage was a whopping 40% higher, which doubled the wholesale price of electricity during that part of the day.

2. Your Air Conditioner Is Your Lifeline: When the heat goes up, people can't help but turn up the air conditioner. That has a significant impact on the electric grid. A Spanish university study found that air conditioning consumes one-third of peak electric consumption in the Summer. This isn't just a matter of convenience, in many cases, it's a matter of life and death. During a 2003 European heat wave, France suffered nearly 15,000 heat-related deaths, mostly among the elderly who simply couldn't cope with the extreme temperatures.

3. Summer Heat Drives More Extreme Weather Events and Higher Energy Prices: On Monday, July 25, the New York Independent System Operator issued a thunderstorm alert at 2:00 p.m. That's not unusual in the middle of the Summer, but when it comes in the midst of a heat wave when the grid is already running at full capacity, fears that a lightning strike could cut the ability to import power from the Upstate to New York City sent a shockwave through the market. Power prices that clocked in at $50 per megawatt-hour earlier in the day rose to $1,000 less than 90 minutes after the thunderstorm alert.

4. Wind is MIA, while Solar Comes on Strong: We asked NEI's Michael Purdie to take a closer look at the performance of renewables on the grid, comparing seasonal performance between Summer and Winter from 2010-2015. Based on data from the ABB Velocity Suite, the capacity factor for wind dropped an average of over 15% from Winter to Summer. In some area, that variability can be problematic, like in Texas last Summer, when ERCOT reported that the grid's wind turbines dropped to 20% of capacity as the temperature topped 100 degrees all over the state. In August 2006, a late Summer heat wave in California saw the state's wind assets drop to just 4% of capacity. Of course, solar power's capacity factor rises almost 35% in the Summer, but that seasonal increase is more than offset by capacity factors that crater nearly 77% in Winter.

5. Nuclear Performance is High Because Plants Prep in the Spring: Between July 23-28, in the midst of the nationwide heat wave, the average capacity factor of the U.S. nuclear fleet didn't drop lower than 96.6%. That's an incredible performance—99 reactors producing electricity at maximum output nearly every minute of the day and night. That isn’t possible without the dedication of outage workers who descended on plant sites throughout the Spring to perform needed maintenance and repairs to ensure this performance when it is needed most.

EDITOR'S NOTE: Even when the mercury tops 100 degrees, it's good to know that you and your aren't completely at the mercy of extreme weather. Just as is the case in the winter, there are a number of common sense rules you can follow to limit the size of your electric bill. Be sure to check out these tips from PG&E to learn more. And please, when you're outside, pay attention to these guidelines from the Mayo Clinic to keep cool and healthy.