Nuclear: Energy for All Political Seasons 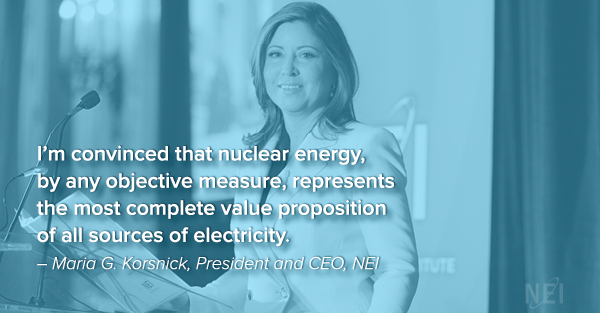 The electoral college will soon confirm a surprise election result, Donald Trump. However, in the electricity world, there are fewer surprises – physics and economics will continue to apply, and Republicans and Democrats are going to find a lot to like about nuclear energy over the next four years.

In a Trump administration, the carbon conversation is going to be less prominent. But the nuclear value proposition is still there. We bring steady jobs to rural areas, including in the Rust Belt, which put Donald Trump in office. Nuclear plants keep the surrounding communities vibrant.

We hold down electricity costs for the whole economy. We provide energy diversity, reducing the risk of disruption. We are a critical part of America’s industrial infrastructure, and the importance of infrastructure is something that President-Elect Trump has stressed.

One of our infrastructure challenges is natural gas pipelines, which have gotten more congested as extremely low gas prices have pulled more gas into the electricity marketplace.

At a nuclear plant, all that fuel that that the reactor needs is already on site for the 18 months or 24 months that that plant will run. That fuel firmness of the existing reactors is something that the marketplace needs to value. And there is progress to be made at the existing plants and for the advanced reactors of the future.

There is already Republican and Democratic support for R&D for advanced nuclear, new reactor concepts that will produce higher-quality heat and that take materials that some people think of as waste and consume them as fuel.

There are changes ahead. The new administration seems likely to step back from the Clean Power Plan and the Paris climate agreement.


But the Clean Power Plan really didn't help the current fleet nearly that much, so losing it is not a huge impact. Many of the states, on the other hand, will still pursue a low-carbon strategy, even if it is not mandated by Washington, and they will value nuclear power.

And regardless of your opinion about carbon, nuclear power plants emit nothing, so they also cut the levels of nitrogen oxides and sulfur dioxide, and particulates. So there's other valuable propositions that nuclear brings to the marketplace.

Under Republicans and Democrats, Washington looks for solutions that have something for everybody. Nuclear is still zero carbon, which appeals to a substantial segment of America no matter who is in the White House, and it reduces smog and haze, which appeals to others. It provides jobs and is an underpinning of national prosperity, which should appeal to almost everyone.

The above is a guest post from NEI's Chief Operating Officer, Maria Korsnick. On January 1, 2017, Korsnick will become NEI's President and CEO.