At the naval base, ships and submarines in port are “cold ironing,” meaning they draw their electricity from shore. Ports in areas with air pollution problems already practice “cold ironing,” although this usually means connecting ships to a power grid that runs at least in part on fossil fuels. (Land-based generators pollute, but less than ships’ engines do.) In this vision, the necessary energy comes from a row of small reactors near the wharf. And in an emergency, the reactors can help power the surrounding city.

In the desert oasis, a nuclear reactor built to power a city a few miles away also provides energy for cleaning up water from a brackish aquifer. That allows lush surroundings in the midst of barren hills. 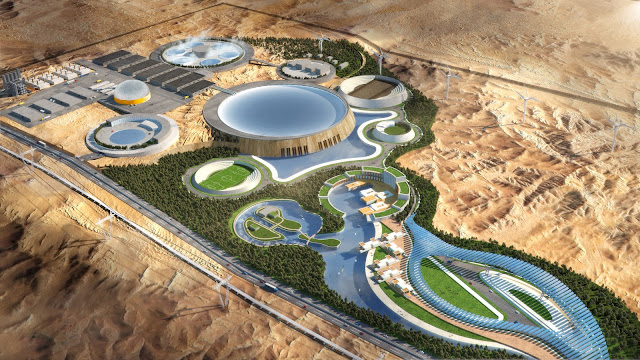 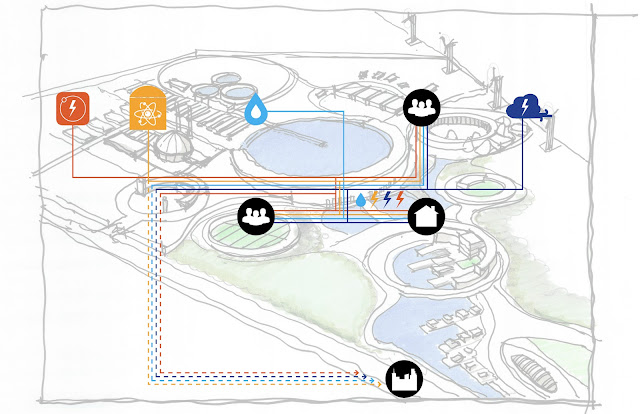 In the transit hub, the reactors can charge electric cars, autonomous taxis, and buses, along with a high speed train.

In the arctic, far from the power grid, a small reactor has replaced the diesel oil that was previously shipped in by truck, barge or even by airplane, all of which costs money and energy. Wind turbines are integrated into the grid, which is isolated but powerful.

And at the data farm, six modular reactors are humming along, with space left for four more, as requirements grow.

One of the forces behind the designs, Suzy Hobbs Baker, a communications advisor at Third Way, said that she had always wanted to add public art to existing nuclear sites, because not everybody likes huge masses of bare concrete. But painting the exterior of an operating reactor can be complicated, she said. She has, however, worked up two designs: a pattern like a double-helix DNA strand for cooling towers and a reactor containment and cooling tower painted like an impressionistic view of the sea, a hint at part of the environment that reactors preserve.

For a new reactor, she said, she’d like to have the aesthetics “baked in from the get-go.”

The images of the new concepts are varied, but the reactors themselves are a cheery marigold yellow.

As in Star Trek, the pictures are understandably short on technical details. But it is not really science fiction; they are a visual representation of the research and development work going on right now. These reactors can be built in a factory and delivered on a truck to wherever they are needed using new combinations of fuel and coolants to produce higher heats at lower pressures, yielding more energy in smaller packages, and opening up new applications.

We’ll talk to the engineers about the feasibility of using marigold yellow.

EDITOR’S NOTE: For many years, one of the members of the team at Third Way, Suzy Hobbs Baker, has been in the forefront of advocating that the industry needed to change the way it looked in order to change the way the public felt about nuclear energy.  Watch this TEDx talk she did in 2012 to learn more.

The above is from Matt Wald, senior communications advisor at NEI. Follow Matt on Twitter at @MattLWald.