By David Bradish February 08, 2007
From one look at how the world could work to constrain greenhouse gases over the long-term, look no further then Princeton University’s Carbon Mitigation Initiative. Instead of falling back on the idea of the one silver bullet to reduce GHGs, two professors, Robert Socolow, and Stephen Pacala, have broken the task into seven wedges.

To keep the focus on technologies that have the potential to produce a material difference by 2054, we divide the stabilization triangle into seven equal "wedges." A wedge represents an activity that reduces emissions to the atmosphere that starts at zero today and increases linearly until it accounts for 1 GtC/year of reduced carbon emissions in 50 years. It thus represents a cumulative total of 25 GtC of reduced emissions over 50 years. In this paper, to "solve the carbon and climate problem over the next half-century" means to deploy the technologies and/or lifestyle changes necessary to fill all seven wedges of the stabilization triangle.

So what are the wedges? Check the table below: 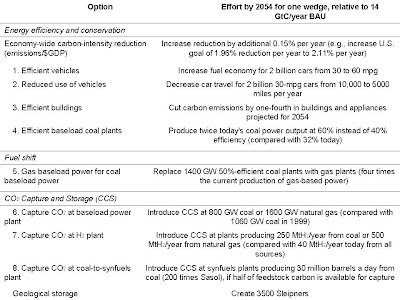 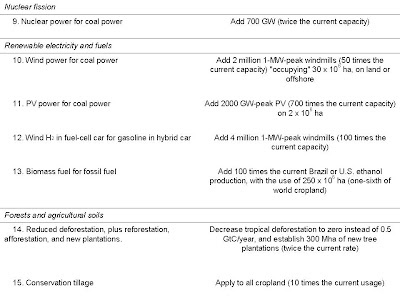 Option 9: Nuclear fission. On the basis of the Option 5 estimates, a wedge of nuclear electricity would displace 700 GW of efficient baseload coal capacity in 2054. This would require 700 GW of nuclear power with the same 90% capacity factor assumed for the coal plants, or about twice the nuclear capacity currently deployed. The global pace of nuclear power plant construction from 1975 to 1990 would yield a wedge, if it continued for 50 years. Substantial expansion in nuclear power requires restoration of public confidence in safety and waste disposal, and international security agreements governing uranium enrichment and plutonium recycling.

Did you read that? “The global pace of nuclear power plant construction from 1975 to 1990 would yield a wedge, if it continued for 50 years.” Meaning we’ve done it before and we can do it again.

Each time I read their ideas I get pumped to go out and promote these solutions. I want everyone from all industries (renewables, fossils, nuclear, tree huggers, etc.) to get together and focus on their contribution for reducing carbon.

Back in the real world though, that thought becomes more a pipe dream than a reality. What’s worse, a former NRC commissioner says nuclear can’t scale to the task while all other options can. I wonder if he has studied how much renewable capacity it takes to fill a wedge. According to the table above, it would take 50 times the current capacity of wind, 700 times for PV and 100 times for biomass. And only three times the current capacity for nuclear. Hmmm. I wonder which is more realistic. I also wonder how many people know that nuclear avoids about half a wedge in the world right now.

For other bloggers’ takes on the Wedge Concept, check out We Support Lee and A Musing Environment. Also don’t forget to review Princeton’s wedge game.

Joffan said…
Several of these wedges make no sense to me.

Wedge 4: Produce twice today's coal power output at 60% instead of 40% efficiency (compared with 32% today).
So what this is (I think) saying is that the business-as-usual scenario envisages at least twice as much coal power as today, and we can save a wedge by increasing the efficiency compared to day's mix which is mostly 40% efficient. However it doesn't decrease the amount of CO2 compared to today!! This just allows the electricity generation to (almost) triple whilst only doubling the coal used.

7. Capture CO2 at H2 plant.
This allows a wedge from producing 6-12 times as H2 as today, which is assumed to be required somehow... I think this wedge should be about transport-use HCs displaced, not CO2 captured.

8. Capture carbon at coal-to-synfuels plant.
I really don't understand this one, surely that synfuel is going to be used in transport and generate just as much CO2 as today?


And given the incredible ambition of some of the other options, I'm not sure why nuclear is restricted to just one wedge... to be similarly ambitious, nuclear could take 3 wedges:

9A, B, C: Generate electricity equivalent to 2006 total usage from nuclear power.

What if we built nuclear plants at the US pace from 1963-1973 but extended that to the rest of the world?

If I remember correctly, those 10 years were the Great Bandwagon Market here and we started a huge number of projects, many of which are still operating today.

Anonymous said…
Sokolow's numbers clearly don't represent any kind of limit to what could be achieved in terms of new nuclear build, if the economics stack up compared to other non-emitting sources.

If we look at Rod's timeline, if we consider 1973, the US's real GDP is roughly double what it was then. So, even assuming that real construction costs are the same as then, and that the same fraction of the economy was devoted to building nuclear plants as was then, the USA should be able to build roughly double the amount of plants constructed in that period.

By comparison, the task of switching from new-build coal to new-build nuclear, and an accelerated schedule of replacing old coal-fired power, hardly represents a challenge at all.
February 13, 2007 at 4:04 AM