By RSM October 13, 2009
Last Wednesday, CSIS hosted Scaling Down Reactors: A Different Model for Nuclear Energy, and has made available the speaker bios and presentations along with audio of the event. Their brief overview of this new & growing field:

Several companies and research teams are now pioneering smaller reactor designs that could present a unique set of characteristics and benefits desirable to domestic utilities as well as other nations interested in nuclear energy. Ranging in size and technology, smaller reactors could offer different capital cost structures, the possibility of modular designs, and new operational and safety characteristics. Internationally, these reactors may also introduce important considerations for grid compatibility and nonproliferation efforts. 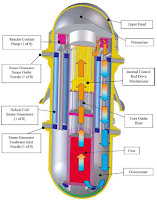 d a workshop Thursday and Friday, Small- and Medium-Sized Reactors, at which Chairman Greg Jaczko spoke. The presenters’ slides are here, except for DOE’s presentation.

NEI was represented by Paul Genoa, who articulated three trends: the need for electricity to drive economic development; the growing connection between economic and energy security; and mounting concern about global warming. Paul told the gathering that small reactors hold a sweet spot where these matters intersect.

Many of these speakers and industry representatives had also spoken at a Hill briefing a couple weeks ago, There's an App for That, organized by the Foundation for Nuclear Studies.

Atomic Insights just published a superb, textured article on NRC’s workshop, noting among other things that "[t]he meeting was surprisingly well attended - there were more than 100 people there. The NRC had to move in extra chairs; it was initially a standing room only affair."

Interpreting one of Chairman Jaczko's themes for the non-government experts among us, Rod's article reads:

Jaczko . . . also recognizes that the change is ultimately a political decision that requires compromises and negotiations that are not in the core competency or even the legislative mandate of his regulatory agency. Inside the government, people often talk about the concept of breaking down organizational barriers that we call silos, but most are also quite reluctant to even recommend actions that are 'outside of our swim lane.' Jaczko has told the people who believe strongly in the value of [these] reactors . . . that he feels their pain and will not oppose a fair solution . . .