Yesterday, Microsoft’s Bill Gates, General Electric’s Jeff Immelt and other big name CEOs who are members of the American Energy Innovation Council released a report that makes five important recommendations for US energy policy. Why did they do this?

As business leaders, we feel that America’s current energy system is deficient in ways that cause serious harm to our economy, our national security, and our environment. To correct these deficiencies, we must make a serious commitment to modernizing our energy system with cleaner, more efficient technologies.

Such a commitment should include both robust, public investments in innovative energy technologies as well as policy reforms to deploy these technologies on a large scale. By tapping America’s entrepreneurial spirit and longstanding leadership in technology innovation, we can set a course for a prosperous, sustainable economy—and take control of our energy future.

Is nuclear included as an innovative energy technology? Well of course. The second recommendation in the report is to “invest $16B per year in clean energy innovation” ($1.4B/year for nuclear fission and fusion). The US invests about $5B right now for all energy research and development. Below is the Council’s recommended budget for US R&D to explore all energy technologies (p. 21): 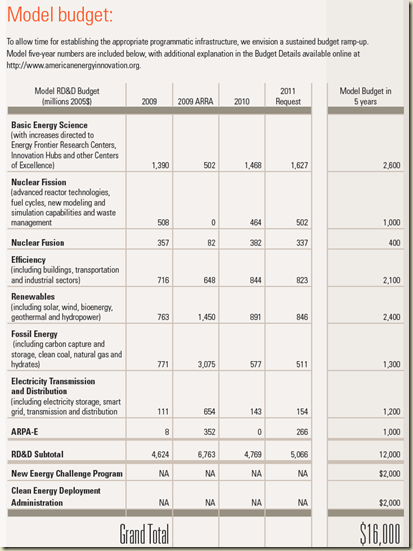 The other study that gives a broad picture of the energy world (particularly electric) is Edison Electric Institute's 2009 Financial Review. For the numbers geek out there, the report has gobs of figures. For instance, at the end of 2009, the total assets of US shareholder-owned electric utilities who represent nearly 60 percent of total US capacity was more than $1.1 trillion, up 3% from 2008 (pages iv & 16). On the other side, though, operating revenues declined nearly 12 percent for those same utilities during 2009 (p. iv), ouch.

There are also quite a few costs and performance figures to view, even historical capacity additions and projections for plants of all types (see table below and check out nuclear compared to others, p. 56).

Also useful to know is EEI’s page 65 shown below which details the renewable energy portfolio standards by state (note the lack of standards in the Southeast due to limited renewable resources – this, among many other reasons, is why new nuclear makes an excellent fit for those states): 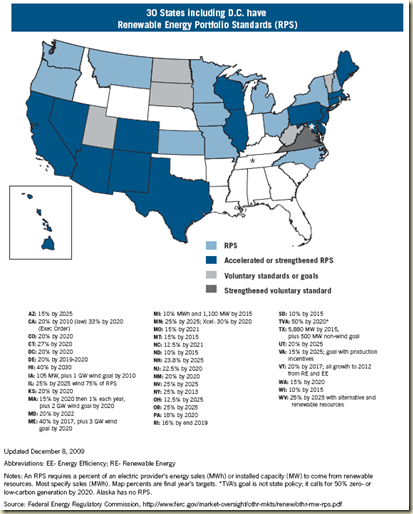 There are plenty more left in the reports to check out so enjoy!