Over the past number of weeks, you’ve seen us highlight nuclear carnivals at other folks’ blogs. This week we’re hosting it.

For those new to the blogosphere, a carnival is when a community of bloggers recap each other’s best posts at a different site every week, month, or whenever. The purpose, of course, is to increase traffic at each other’s sites. Not only that, it gets the community more involved and definitely creates great connections. We have some deep thinkers and writers in the nuclear blogging community and the carnivals definitely show it.

Despite what some may like you to believe, the nuclear renaissance is upon us. Don’t let anyone get away with telling you otherwise — they are badly misleading you.

How about this for some supporting statistics: 29 new reactors, totalling 26 gigawatts of electricity output (operating at high capacity factors without the need for energy storage/backup), will start operation in 13 different countries in the 2010 — 2012 period – that’s within the next 3 years (average reactor size is 880 MWe).

Brian Wang at Next Big Future (the leader of these nuclear carnivals) took to town the bogus claims made by a Stanford Professor:

In a debate between Stewart Brand (pro-nuclear) and Mark Jacobson (anti-nuclear), Mark Jacobson tries to make the case that we can generate all of the energy that we need without nuclear power (and without fossil fuels) … one of Jacobson's main distortions is that nuclear power is slower to develop than solar and wind.

I am all in favor of building more solar and wind, but it is wrong to say that building a lot of it is faster than building nuclear power. Nuclear power increased by 300% since the 1980s in the United States. Since 1987 the US alone has added 345 TWH of nuclear which is more than the entire OECD has now for solar, wind and geothermal.

Steve Aplin from Canadian Energy Issues logically deconstructed the Floodgates hypothesis on whether nuclear recycling in the US increases the proliferation threat from other countries:

A brief look at the actual history of recycling reveals that the countries to whom recycling made economic sense made use of it regardless of what the U.S. did. France is of course the supreme example. Of the fifty-eight nuclear reactors in the French civilian fleet, 21 are burning recycled fuel as I write this. A further six are capable of it. Another one is authorized to burn it, and the Flamanville 3 EPR, which I visited last week, will also be capable.

He’s also just been added to our blogroll.

Up next and adding to the proliferation dialogue, Charles Barton at Nuclear Green gave us a relevant history lesson of certain countries while explaining the canard of nuclear proliferation through recycling. As well, Mr. Barton provided an update of the various discussions going on at Energy from Thorium. (Excellent new picture heading for your blog, Charles.)

Dan Yurman at Idaho Samizdat has the latest status of what’s going on with new reactor designs:

Several developers of new reactor designs reported progress this week during the semi-annual meeting of the American Nuclear Society (ANS). The investor looking for something completely different that might make a difference to the nuclear energy industry has three new ideas to choose from this week.

At Yes Vermont Yankee, Meredith Angwin is on top of NRC’s recently released statement exonerating VY. As well, she analyzed the Vermont candidates’ hot air about replacing Vermont Yankee jobs if the plant is to shutdown. Boy, I’d say some of their answers were a bit creative …

Sovietologist has an awesome picture of the inside of the control room of Chernobyl Unit 1. 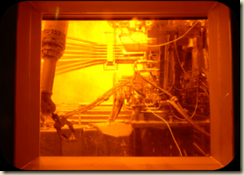 CEO Anne Lauvergeon inaugurated the cold crucible, celebrating the first use of this advanced technology. This world first for the vitrification for high-level waste has been under development in collaboration with CEA (Atomic Energy Commission) for more than 25 years.

The principle of the cold crucible is to induce electric currents directly in the glass to raise its temperature without heating the crucible. The advantages of the technology include increased frequency of the vitrification, longer equipment life span, and the ability to vitrify wider range of products and reduce the volume of final waste.

And last but certainly not least, Rod Adams at Atomic Insights recounts his week in France after touring Areva’s nuclear facilities:

There has been a long standing tradition among nuclear professionals to point a finger at "the media" and blame it for some of the negative perceptions held by many. Areva has recognized that nature of media and content production/distribution has changed. It is taking advantage of the growing opportunity for the industry to tell its own story to people who are technically competent and focused on telling compelling stories about their favorite technology. That will allow us an opportunity to lead the conversation rather than always being on the defensive.

Well said. Hope you all enjoyed and keep it up!