Our Question for UCS: Why not charge your car with nuclear-generated electricity?

By Eric McErlain April 17, 2012
Yesterday the Union of Concerned Scientists published a new study about how using electric vehicles could help the U.S. cut fuel costs and reduce emissions. When auto companies begin manufacturing electric vehicles in larger numbers, the nation's 104 nuclear reactors (and counting) will be standing by to supply that zero emission electricity that UCS loves so much.

Unfortunately, the press team at UCS apparently forgot how to spell the word nuclear (I know you're shocked) when they put together their report. From the press release:

[T]o fully realize the benefits of EVs will require changing not just the kind of vehicles people drive, but also the power that drives them. Electric drive vehicles can be zero emission today, when powered by renewables like solar and wind. But it will take continued steps to ramp down coal and ramp up renewables so that every region can enjoy clean energy and the best benefits EVs have to offer.

Given that wind and solar only generated about 3% of U.S. electricity in 2011, we've got a long way to go before those two sources produce enough juice to contribute a significant portion of normal U.S. demand, never mind being able to provide electricity for millions of vehicles. Right now, when it comes to zero emissions electricity, nuclear is the only source of baseload power that's available.

The New York Times produced its own map as a companion to their story on the study. I've posted a portion of the map below. Take a good look the states of New York, Vermont, New Hampshire and Massachusetts. 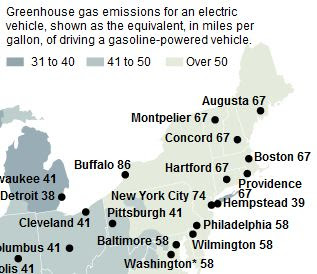 According to the key, an electric vehicle driven in Montpelier, Concord, Boston or Hartford all clock in at an impressive 67 mpg. And in New York City, the figure is 74 mpg. Buffalo* clocks in at an amazing 86 mpg. What do these cities have in common? They're all on a regional electric grid that's served extensively by nuclear power plants.

In contrast, take a look at the figure for Hempstead, a town on Long Island just a few miles outside New York City. The figure there is a comparitively unimpressive 39 mpg. Why is that figure so low for a town that's only a short drive from New York City? It's because a good portion of New York City's electricity comes from Indian Point Energy Center, home to a pair of nuclear reactors. Meanwhile, the only nuclear reactor ever built on Long Island, Shoreham, was decommissioned in the 1980s before it could ever supply electricity to the grid.

The bottom line here: UCS neglecting to mention nuclear energy in the press materials for this report was one heck of an oversight. It's almost as if they didn't want anyone to know that nuclear energy was emission free. But don't forget, UCS says they aren't anti-nuclear, right?

*We should note that Buffalo gets lots of power from hydroelectric too.

jimwg said…
Well, your electro-car's only as clean as the juice it gulps!

RE: "The bottom line here: UCS NEGLECTING to mention nuclear energy in the press materials for this report was one heck of an OVERSIGHT."

Almost got a hernia from doubling over LOL'ing at that!

Re: "It's almost as if they (UCS) didn't want anyone to know that nuclear energy was emission free. But don't forget, UCS says they aren't anti-nuclear, right?"

Mmm. What that cozy bunch of media darlings needs (at least!) is a good hard YouTube-grabbing open-letter challenge to that assertion!

On page 9 of the UCS report:
http://www.ucsusa.org/assets/documents/clean_vehicles/electric-car-global-warming-emissions-report.pdf

Bill said…
How about giving the NYTimes' Paul Stenquist some credit, for going beyond the UCS's press release:

trag said…
Two or three years ago (certainly within the last five) NPR foolishly used a UCS representative as it's "neutral" expert in a story about energy production and global warming.

When the journalist asked the UCS rep. about nuclear electricity generation, the UCS representative declared, "Nuclear winter is not the answer to global warming."

Clear proof, from UCS's own authorized mouth-piece, that they're a bunch of liars.

I don't have time to hunt through the transcripts (nor know if they're still on line) but the story was in the evening when I was driving home, so given the schedule, it was probably either on "Marketplace" or "The World".