Electricity production issues are not quite as cut-and-dried as portrayed in the article, certainly not from the vantage point of energy companies who must evaluate an array of factors to determine what their future generating mix will and will not be. A nuclear energy facility produces benefits well beyond the electricity it generates. They include economic benefits like jobs, taxes and procurement; grid reliability benefits in the form of voltage support and ancillary services; the environmental benefit of avoided emissions; and the energy security benefits of an electricity source that adds diversity and forward price stability to the electricity supply portfolio.

It also bears noting that extremely low natural gas prices in the United States are not sustainable. Low natural gas prices are caused by a combination of reduced demand for natural gas (due to subpar economic growth), abnormally mild weather for the past several winters and a major increase in supply (due to improved drilling techniques that have unlocked vast reserves of shale gas). As the result of low gas prices, producers of natural gas have already slowed drilling: the number of rigs drilling for natural gas in the United States has dropped approximately 50 percent in the past 12 months. At the same time, the historic volatility of natural gas prices continues to be seen in the spot market. Just last week, natural gas prices in New England and New York City topped $30 per million BTUs, the highest level seen this winter, according to the U.S. Energy Information Administration. For New England, this was actually the highest level seen since January 2004.

Judgments about the viability of any given nuclear power plant are business decisions made by individual utilities based on economic circumstances unique to the facility. The Nuclear Energy Institute’s long-term belief is that, beyond the ongoing construction of five reactors in Georgia, South Carolina and Tennessee, new nuclear energy facilities will be built once electricity demand rebounds. Demand for electricity in the United States has not yet returned to the level seen in 2007, before the financial crisis.

For those who might have missed it, here's a table from the Energy Information Administration's Northeastern Winter Natural Gas and Electricity Alert that highlights those dizzying spot prices Richard referenced in his response. 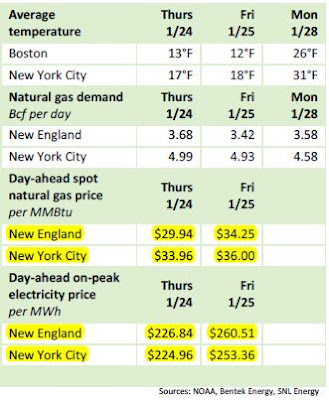 AK Engineer said…
You use a SPOT price for Natural Gas in New York in the winter to make the case for Nuclear? Maybe some utility is buying spot gas to make power but let’s hope not. It’s more correct to point out that gas users pay for pipeline transportation charges and some users pay a premium for firm delivery so the Henry Hub price is not the price paid by gas consumers. Gas users also protect themselves from price fluctuations by buying futures contracts. I favor free market solutions - right now the low cost of gas must figure into any generation decision. At some point gas prices will move up and the market will find a new equilibrium based on the new reality of lower cost gas. Higher gas prices will promote more drilling, and that provides jobs and economic growth too. Let’s maintain balance in the ongoing dialogue of energy deployment.
January 31, 2013 at 11:37 AM

David Bradish said…
AK, the case Myers was making in reference to the Northeast spot prices was that natural gas continues to be volatile even with its abundance. Sure, spot prices reflect only a small percentage of the gas consumed. But the contracts and hedges that are made are based off of the spot price. So the spot price does matter. Seems to be a balanced argument to me...
January 31, 2013 at 12:53 PM

J Melito said…
The lack of a spot price (nobody buying) is indicative of a dysfunctional or non-functioning market. The Soviet Union tried that approach; today, there is no Soviet Union. My take is that the comparison between nuclear and metered-fuel thermal power has always been a mistake. Load demand variations were, are, and should remain the supply system's concern. But in truth, everyone would like to get most of their electric power directly from large hydro-generation sources like Niagra Falls, or Bonneville or Hoover dams. Nuclear, a non-metered thermal power source, can be illustrated this way: A reactor heats pressurized water to boiling, the steam flows up a long channel of say 10,000 feet above grade, there a large chamber condenses the steam by surrendering the heat to the surrounding cooler atmosphere, the condensate flows back down from on high and passes through a water-wheel that drives a generator (just like a hydro-reservoir), returns to the reactor and the cycle repeats. However, unlike a large hydro-generation project, a nuclear power plant can be built in the middle of a dead flat plain, even a desert, or on low coastal lands, or just about anywhere. And, no matter where, once a price is established the nuclear plant will steadily produce power for decades. In fact a large, well operated nuclear generation plant produces a thermal output of about 0.1 quad or over 1 billion therms every year. Currently, we have not even technically confirmed for just how long a well-built, well-maintained nuclear unit can do this. Given that there are hydro-reservoirs that have operated since the mid-17th century and the Roman Forum has been around for 2 millenia, most of us (all?) will not live long enough to ever know - how's that for ROI.
January 31, 2013 at 3:56 PM