V.C. Summer: “A major contributor to the local economy.” 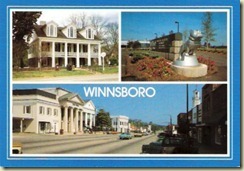 Some happy news is always a good way to kick off the weekend.


Fairfield County officials gathered at the county treasurer’s office Jan. 15 to meet with representatives of the V.C. Summer Nuclear Plant – and receive a check for $23.4 million.

If my local nuclear facility wanted to hand me a few million dollars, that would be a-ok, but this actually speaks to one of the major benefits of having a power plant in the neighborhood.


“We are very pleased that V.C. Summer Nuclear Station continues to be a major contributor to the local economy through property taxes that support schools, roads, and critical public services for the residents of Fairfield County,” said Dan Gatlin, vice president of Nuclear Operations at V.C. Summer.

The article doesn’t say, but I wager Summer is one of the larger employers in Fairfield County, so it has value beyond paying property taxes. And beyond property taxes and employment opportunities, Summer also provides a economic root system for all kinds of offshoot businesses in Fairfield and neighboring South Carolina counties – and I don’t just mean nuclear parts manufacturing. Think eateries and office supplies and businesses that cater to a larger, more diverse population.


Fairfield County Superintendent of Schools J.R. Green was on hand for the ceremony since a large portion of the tax dollars — $12,878,000 — funds education in the county. Just over $20,000 is allocated to the towns of Ridgeway and Winnsboro, combined. Just over $7.7 million goes into the county general fund. Other funding supports the county EMS, fire department and county library.

That $20,000 for two towns could use a little more explanation – seems stingy – but it may be that the county handles most of the general needs for those towns. And if the country improves its infrastructure with increased property taxes, it improves its appeal to other companies that might want to come out their way and set up shop. That nuclear power facility is a good in itself, but it also helps the human ecosystem of an area.

The story skirts around it a bit, but the financial and employment opportunities are only going to get better, as SCANA builds two more reactors at Summer (Nuclear Street has some nice pictures of the construction). That’s a lot of building employment up front and then staffing afterward. So Fairfield County did well in 2012 – but that’s nothing compared to the rest of this decade and beyond.

We’ve made this argument before about nuclear energy plants – that they can represent economic bonanzas for their communities – but it’s really nice to see this demonstrated in a local newspaper – in this case, the Herald Independent, which covers the whole county.

When people want to change direction in energy policy – say, from coal to wind or away from nuclear energy – they do it without thinking of the actual human consequence. But there is consequence – and in a place like Fairfield County, but really anywhere, it would be severe.

Anonymous said…
They seem to throw in a few pictures of the construction in their investor presentations. The latest one is below but there isn't much new progress. Niether Vogtle or VC Summer are going to make any real progress until the NRC allows them to pour safety related concrete. Vogtle appears to be a little further along, but none of the work they have done has an affect on critical path so it is only for appearances. Vogtle needs to justify their rate increase by showing progress and therefore have advanced non-critical path work in order to give the appearance of progress when none has actually taken place in 6 months.