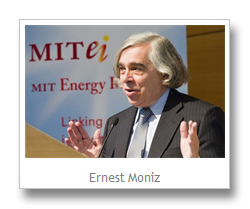 If you want a sense of what Ernest Moniz, the MIT physicist who is President Barack Obama’s pick for energy secretary, thinks about nuclear energy, read some of his writing. There’s a lot of it, and he’s pretty direct:


It would be a mistake, however, to let Fukushima cause governments to abandon nuclear power and its benefits. Electricity generation emits more carbon dioxide in the United States than does transportation or industry, and nuclear power is the largest source of carbon-free electricity in the country. Nuclear power generation is also relatively cheap, costing less than two cents per kilowatt-hour for operations, maintenance, and fuel. Even after the Fukushima disaster, China, which accounts for about 40 percent of current nuclear power plant construction, and India, Russia, and South Korea, which together account for another 40 percent, shows no signs of backing away from their pushes for nuclear power.


Nuclear power's track record of providing clean and reliable electricity compares favorably with other energy sources. Low natural gas prices, mostly the result of newly accessible shale gas, have brightened the prospects that efficient gas-burning power plants could cut emissions of carbon dioxide and other pollutants relatively quickly by displacing old, inefficient coal plants, but the historical volatility of natural gas prices has made utility companies wary of putting all their eggs in that basket. Besides, in the long run, burning natural gas would still release too much carbon dioxide.

Moniz is Director of the Energy Initiative and Professor of Physics and Engineering Systems at MIT. He served as Undersecretary at the Department of Energy in 1997–2001.

NEI’s take is here, from President and CEO Marvin Fertel:


“In nominating Ernie Moniz to be Secretary of Energy, President Obama has sent America a strong message that its energy leadership will be entrusted to an advocate of clean energy supplies, including nuclear energy. Dr. Moniz is experienced and well respected in the energy, nonproliferation and national security communities worldwide.  He has made it clear that he recognizes nuclear energy’s important role in reducing greenhouse gases as part of a balanced, low-carbon electricity generation portfolio.

Like NRC Chairman Allison Macfarlane, Moniz was a member of the administration’s Blue Ribbon Commission on America’s Nuclear Future, which recommended a new strategy for managing used nuclear fuel.

I’m sure we’ll learn plenty more in the coming days.

jimwg said…
Holding my breath till he walks the talk -- and in a green-committed administration that'd rather throw billions at solar and wind and algae than one SMR, or call the anti-nuke dogs off nuke projects, that might be a very long time.

Anonymous said…
So far the only beef I have with Moniz was the role he played in getting the High Flux Beam Reactor at Brookhaven shutdown. That was back in the dark days of the Clinton era and the Richardson DOE. Granted that BNL and its operator at the time didn't handle the situation very well from a PR viewpoint, but in the end there was no technical or safety justification for trashing a scientific facility that was incredibly productive and perfectly benign. Moniz was at DOE at the time and had a hand in this fiasco, which in the end dirtied the hands of everyone involved. It not only ruined a very useful scientific tool, but destroyed the careers and jobs of very many fine people. For that, I cannot overlook the culpability of all those involved, and that includes mainly Bill Richardson but also, unfortunately, Ernie Moniz.
March 5, 2013 at 1:07 PM