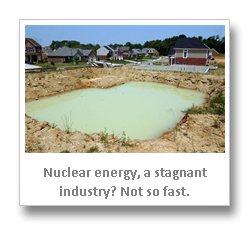 Because of the low price of natural gas, which has benefitted utilities and caused some of them to reweigh their portfolios, the prospects for coal, nuclear energy, even renewable energy sources have become considerably stiller – milkier - stagnant. Agree?

If you’re looking for a simple narrative around energy, I suppose that works well enough apart from being false. But variations on it can feed news stories and editorials for quite awhile. You don’t have to like or dislike nuclear energy (or coal, etc.) to fit it to the narrative, it’s all very “factual” and non-partisan. It’s like a theory, really. You observe events and derive a larger meaning from them.

Here’s the thing: theories evolve with the collection of new data, but news narratives often do not. They can be useful in a quick moving newsgathering environment, but a bane, too, because they allow reporters to lean on set storylines rather than on the relevant fact set. The latter can even become a bother if it clashes with the narrative.

Take this story, for example, from the Washington Post. It does not quite generate a set narrative to fit nuclear energy into, but you can see an effort is being made in that direction:

Only five years ago, industry executives and leading politicians were talking about an American nuclear renaissance, hoping to add 20 or more reactors to the 104-unit U.S. nuclear fleet.

But today those companies are holding back in the face of falling natural gas prices and sluggish and uncertain electricity demand.

And here are the facts to back it up.

On Monday, the Nuclear Regulatory Commission (NRC) reiterated its refusal to issue a license for a new unit at Calvert Cliffs, Md., that a French company had hoped to make the model for a fleet of reactors. A pair of reactors in Southern California are under scrutiny over whether a major contractor and a utility there concealed concerns about potential cracks in the tubes of a steam generator. And nuclear plants in Wisconsin and Florida are closing down because their owners said they cannot compete with less expensive natural-gas-fired electricity.

None of these involve energy players “holding back,” but is a collection of episode, all of which have individual causes without much to link them together. In their accumulation, they do not respond to a single explanation unless you make the scope exceptionally broad.

As for the overall demonstration of nuclear energy’s struggle, join me, please, in a heartfelt “Meh.” Writer Steve Mufson does a reasonably good job with his evidence (he explains the AREVA deal fairly, for example), but there just isn’t much cohesion to the narrative. Even he admits, more-or-less, that the industry is not stagnating in the ways one usually uses the term and never has been a still pond.

Despite the relatively stagnant growth of U.S. nuclear power plants, the industry has found ways to maintain its roughly 20 percent share of electricity generation. The NRC has issued 73 license renewals for plants, and operators have figured out ways to improve efficiency and add the equivalent of 24 (sic – see below) new 1,000-megawatt units over the past 20 years, according to Farrell. 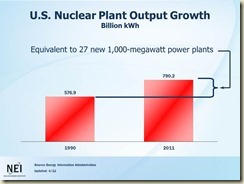 See? I’m not sure I’d attach “stagnant” to that description and this was during a time when few new nuclear facilities were built. 27 new plants, however, were “built”-in-place, an impressive display of technological savvy (click on chart for larger). And the fleet capacity factor went from the 60s to the 90s during the same 20 years, which demonstrates a growing familiarity with the technology and the experience and efficiency of the work force. 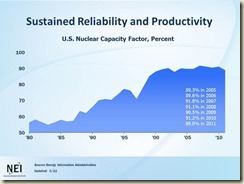 But the theme of the narrative remains “nuclear energy industry gone fetid.” Regardless, Mufson keeps demonstrating that it is not really true.

Many companies are also talking about the possibility of turning to smaller, cheaper reactors. [NRC Chairman Allison] Macfarlane said she expects an application for design certification in 2014.

Industries in holding patterns tend not to invest in new technology.

I don’t know about this story – it has a theme it develops and is technically well-written and researched, with nothing to quibble about except details. The headline is “In U.S., nuclear energy loses momentum amid economic head winds, safety issues,” so my expectation was that the tone would be far edgier and downbeat on the industry.

But nuclear energy has not lost momentum – even the story says so - unless you look at predictions from 10 years ago and conclude that not fulfilling them equals stagnation. If you applied this rationale to politics, for example, then all Presidential terms lose momentum because not all the campaign promises came to pass.

I probably should have skipped over it, but it was on the front page of the (printed) Post, so the paper really wanted to make a play with it. I don’t think it demonstrates that there’s anywhere near enough stinkweed down at the nuclear energy farm to rate pulling. Maybe the coal industry will fit the storyline better. I wouldn’t bet my paycheck on it, though.

Leslie Corrice said…
The "negative" slants seem to have the rather common "nuclear viewed in isolation" motif. It's been a tactic used by nuclear critics in my 40+ years of dealing with the issue.
March 15, 2013 at 3:35 PM

There may be a nuclear renaissance in the US someday, perhaps when the new small nuclear reactors are finally developed. But it certainly isn't here now!

I stand corrected. But its only three, not five. And that's still not a nuclear renaissance. China has 31 reactors currently under construction. That's a renaissance!

There are two more US reactors planned in Georgia and South Carolina, but they're not under construction.

Anonymous said…
Three is better than zero. I think the hope was that once these initial ventures took off and were successful (i.e., timely and on-budget, which appears to be problematic at this point), it would pave the way for others. What has blindsided us is that we seem to be losing about one for every one we gain, and to make this work we have to CUT THAT OUT. So, until then, I agree, it is not very much of a "renaissance".
March 17, 2013 at 11:06 AM