Sen. Lisa Murkowski: “A wake-up call to the continued importance of baseload capacity.” 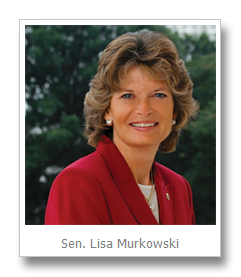 There’s absolutely no reason for a senator from Alaska to be so knowledgeable about nuclear energy, yet Sen. Lisa Murkowski (R-Alaska) is and has been one of its staunchest advocates. This is doubtless because she is the ranking member of the Environment and Natural Resources committee. Congressmen can be notoriously poor at learning the relevant issues of their committees, but Murkowski isn’t one of them – she really knows her energy beans and, as a bonus, has been one of the least ideologically driven members of the committee. She has worked comfortably with (the very liberal) Chairman Ron Wyden (D-Ore.) on legislation that avoids partisan potholes and aims to fix problems in the energy realm.

So we were very interested to see what Murkowski had to offer at the winter NARUC (National Association of Regulatory Utility Commissioners) meeting here in DC.

She used the occasion to release an unusually on-point report called “Powering the Future: Ensuring that Federal Policy Fully Supports Electric Reliability.” Why on-point? The stability of the grid, sorely tested recently by the polar vortex, has been percolating as a subject for awhile now. One reason for this is the growing understanding that shutting nuclear plants underscores their value as grid stabilizers - they produce plentiful electricity on close to a 24/7 basis. Replacing a nuclear plant is not an insolvable problem, but it does raise significant issues, one of which is ensuring enough baseload electricity to withstand significant demand, as occurred during the vortex.

This is what Murkowski says about the grid:

In stark contrast to far too many around the globe suffering in energy poverty with limited or no access to electricity, for most Americans the light turns on when they flip the switch. Keeping
the lights on, however, is a highly complex undertaking, requiring extensive planning and coordination. The lack of few efficient and commercially viable large-scale electricity storage mechanisms becomes more important as the energy resource mix changes and requires an electric grid that is both flexible and resilient. This is especially true when baseload generation is taken offline and grid fundamentals change.

Baseload energy includes coal, hydro, natural gas and nuclear energy. Hydro and nuclear energy do not produce carbon emissions. No renewable energy source aside from hydro can claim this. Nuclear energy is sometimes described as sustainable rather than renewable because its fuel, uranium, is not infinite, but can sustain electricity production for the foreseeable future (and uranium is, of course, not the only fissionable element).

The polar vortex makes an appearance in the report – Murkowski also cites superstorm Sandy and the derecho (all these new weather terms to learn!):

The Bulk Power System (BPS) has already been challenged in 2014. The deep freeze brought on by January’s polar vortex resulted in at least 50,000 megawatts of power plant outages. The electric industry has an impressive history of learning and improving from these system challenges. Among other things, what we learned from the Polar Vortex is that for one key system 89 percent of the coal capacity that is slated for retirement next year was called upon to meet demand. We also learned that nuclear power plants operated at over 90 percent capacity through the event, demonstrating their consistency, resiliency, and reliability. This should serve as a wake-up call to the continued importance of baseload capacity.

Oh, there we are – and there’s the call: not to nuclear energy per se but to baseload energy. That’s important – it’s key to Murkowski’s argument.

Murkowski is not proposing legislative action in this report, instead she is refocusing the energy discussion on the grid and government actions that can apply significant stress to it. Much of this has to do with regulation, particularly those issued by the EPA. While this is a persistent Republican issue, Murkowski tilts the argument away from regulation as a job killer to too much regulation as a grid stressor:

The concern is not just one single rule, but rather it is the accretion of rules and the process by which they are unrelentingly proposed and implemented, as if in a vacuum. Multiple EPA rules will impact the utility industry; particularly, the following suite of regulations continues to draw the most attention.

I won’t list the “suite,” but here’s one that pertains to nuclear energy:

Cooling Water Intake 316(b) – Stringent fish mortality and water intake velocity standards, without regard to site-specific factors, may make the standards unachievable.

Actually, this impacts any thermal plant, including gas and coal plants; most of Murkowski’s list zeros in on coal regulation in particular:

Coal Ash – Regulation of the storage and containment of coal ash, a byproduct from power plants, which could further drive up compliance costs at new and existing plants.

I don’t agree with slackening on this issue at all, as unleashed coal ash can be fantastically destructive. Here’s a story from CNN:

The coal ash poured out of a broken pipe into the Dan River, turning water into dark muck.

It took nearly a week to stem the spill, which sent millions of gallons of sludge from a retired power plant into a river that supplies drinking water to communities in North Carolina and neighboring Virginia.

Workers stopped the spill by plugging the broken pipe with concrete this weekend. Now government scientists and the United States' largest electric utility face a daunting task: cleaning it up.

But that’s okay. Murkowski is making a point, not issuing a directive. All her examples are arguable to someone. The point is, she’s raising in importance the issue of the cumulative impact of regulation. That is important and should be addressed – energy companies have really swayed a bit from regulatory overload, and the nuclear industry in particular has had to implement what seems to be an endless bout of post-Fukushima rulemaking. It’s not that the rulemaking is terrible – just that its piles up to the extent that it’s impossible to untangle the essential from the inessential from the optional. And that lack of discrimination, as facilities scramble to meet deadlines, can defer what is most useful and safety-enhancing. Murkowski has performed a valuable service by opening up this topic to a wider audience.

You can read her presentation here.