Nuclear Technology’s Trail Out of the Valley of Death 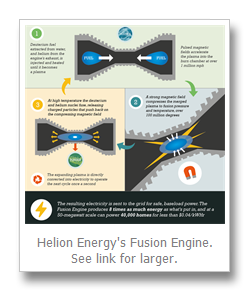 When Bill Gates became Chairman of the Board of TerraPower a few years ago, the potential role of angels and venture capital to push energy technology forward became more apparent. Gates became involved with TerraPower because -

of his belief that nuclear energy will play a key role in addressing the imperative to move to low-carbon or zero-carbon energy. Because energy is a critical element in global development, he has personally supported numerous businesses working to develop safe, affordable and environmentally-friendly sources of electricity. He is an advocate for dramatic increases in government spending on energy research and is a founding member of the American Energy Innovation Council.

Another Microsoft veteran, Nathan Myrhvold, is TerraPower’s Vice Chairman of the Board, so perhaps collegiality and friendship also play a part. In any event, they have helped TerraPower move forward.

Gates would be classified as an angel, an individual who materially contributes to startup projects. Venture capital played a part, too, with Charles River Ventures and Khosla Ventures working with TerraPower.

In startups, most definitely including technology startups, there is much discussion of the so-called “valley of death.” Forbes’ Martin Zwilling describes it thusly:

The “valley of death” is a common term in the startup world, referring to the difficulty of covering the negative cash flow in the early stages of a startup, before their new product or service is bringing in revenue from real customers.

According to a Gompers and Lerner study, the challenge is very real, with 90% of new ventures that don’t attract investors failing within the first three years. The problem is that professional investors (Angels and Venture Capital) want a proven business model before they invest, ready to scale, rather than the more risky research and development efforts.

Zwilling is offering advice to small entrepreneurs – and mostly steering them away from venture capital as antithetical to riskier new projects. That would seem to leave technology projects in the valley.

Investing in science and energy innovation is slowly swinging back into fashion in Silicon Valley. It seems like this is partly because of a backlash against the idea that Silicon Valley hasn’t been funding the world’s more difficult problems, and instead has been making easy money on things like social media apps.

That’s from Gigaom’s Katie Fehrenbacher, who uses the recent funding of Transatomic Power as the hook to launch an examination of venture capital and nuclear technology projects.  She focuses largely on a company called Helion Energy, a fusion project, and mentions TerraPower and General Fusion in passing. We looked at the Transatomic deal here.

Evan a few swallows don’t make a spring, but maybe it’s time to get out the binoculars as more birds flock. The projects described by Fehrenbacher are variegated in terms of technology – new ideas, revivals of older ideas, some fanciful ideas (fusion, of course – kidding!). It reflects the interest in nuclear as a “low-carbon or zero-carbon” producing energy source, perhaps a broadening of interest by venture capital firms and maybe more aggressive fundraising by project leaders. As a trail out of the valley of death, it’s encouraging - fewer brambles along the way, anyway.