In Virginia, No Debate on Nuclear Energy 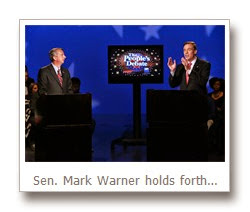 The physical presentation of the Virginia Senatorial debate this past weekend wasn’t all that polished – it didn’t really need to be - but Sen. Mark Warner (D) and his Republican challenger Ed Gillespie certainly were on their respective games. Both stayed on-point and came prepared with well-tuned arguments. And they represent starkly different worldviews, which makes voting for one or the other easier for voters.

However, if you’re a one-issue voter and that issue is nuclear energy, you’ve got a problem.

Here is Ed Gillespie from his campaign Web site:

Virginia is blessed with abundant energy resources, from coal and natural gas in the Southwest to offshore wind and deep sea oil and gas off our coast. We are home to a large number of employers in the nuclear industry and nearly 40 percent of the energy Virginians consume comes from the state’s safe, emission-free nuclear facilities. Energy companies and energy production create good, high-paying jobs across the professional spectrum, from engineering to computer programming. Electricity—and all that it allows—are critical to our nation’s prosperity.

We need to encourage energy efficiency and the use of solar where it makes sense. We also need to do more to encourage the continued development of nuclear energy as a low-cost and low-emission energy source for the future.

Mark Warner, from his site:

Sen. Warner understands that it will take a combination of cleaner fossil fuels, solar, wind, bio-fuels, nuclear energy and next generation battery technologies to meet our future energy needs.

Warner also stressed his all-of-the-above support during the debate:

I think one of the great success stories of the last decade has been the explosive growth of America energy. … I support all-of-the-above energy sources, including coal, including natural gas, including renewables, including nuclear.

Start at about 29:00 for the energy portion.

There actually isn’t a lot of space between Warner and Gillespie on energy issues. We have no donkey or elephant in this race – that’s for the people of Virginia to decide – but it’s heartening to see nuclear energy so non-controversial that two candidates who differ on so much agree so heartily on this.

Virginia has four reactors, two each at Surrey and North Anna. Nuclear energy supplies about 38 percent of Virginia’s electricity, more than any other source. (Coal is second, with 27.7 percent.)

Coal mining is quite important in the southwest portion of the state. I won’t go into the coal portion of the debate – not my brief - but will note that both candidates mentioned visiting that part of the state and expressed concern about EPA’s draft climate change bill as holding the potential to harm the coal industry.

But that’s coal. If you needed proof that nuclear energy long ago ceased to be much of a partisan issue, here it is.

memeticist said…
Perhaps this is because Dominion (which operates these reactors is the largest campaign contributor in Virginia.
March 2, 2015 at 7:14 AM