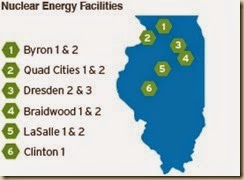 Washington state, as we’ve seen, is moving full speed ahead with legislation to explore the possibility of nuclear energy in that state, especially the revenue-raising, job-creating possibility of manufacturing small reactors there. This is heartening, of course, not to mention a good move by the state.

Generally, nuclear energy measures in the states have come and gone and often come around again. State legislatures have shorter sessions (in general) than their federal brethren, so a lot of promising sounding bills hit the wall of sometimes very short meeting schedules – this is true of everything that is not directly budget-related. Some bills, such as repealing the moratorium on uranium exploration in Virginia*, get really close to passing, then the session ends. Of course, some bills just don’t pass muster and get voted down. It happens.

But the Washington legislation points to new possibilities for nuclear energy action in the states, even if, as they say, one swallow doesn’t make a spring. How about two?

Well, that’s now really nuclear per se, is it? But wait:

The LCPS would require ComEd and Ameren to purchase low carbon energy credits to match 70 percent of the electricity used on the distribution system. It is a technology-neutral solution, which means it would allow all low carbon energy sources – including wind, solar, hydro, clean coal and nuclear – to compete on equal footing.

There we go. This is actually significant because it points to an assessment – a realistic assessment, we’d say – that a “low carbon” standard has a much better chance of getting a state to its goals in reducing carbon dioxide emission that the more common “renewable” standard that many states have instituted. A renewable energy standard certainly sounds good – and the intention is certainly good – but renewable energy is still too limited in output and reliability to get you where you want to go. Including nuclear energy in the standard does not throw wind and solar under the bus of practicality, but it recognizes that all of them have a place.

That’s important: even if you think the nuclear energy industry has glommed onto its emission-free properties to propagate itself  so what? It does do that and it is worth propagating to fulfill a supremely important policy goal. With all the current technologies lined up, it’s really the only one that can. (Hydro is also effective, of course, but environmental concerns make it very difficult to build new dams.) One doesn’t have to be a cynic to get that – nuclear energy may not have been introduced to produce carbon emission-free energy, but it has always done so.

Still, this is a committee vote – this legislation could still get caught short further along the line. We’ll see.

So, Illinois. Even two birds are worth one in the bush – or something. It will be interesting to see if other states follow its lead and introduce “low carbon” standards that nudge nuclear energy into the carbon emission reduction tent. It’d be smart policy, that’s for sure.

One of the attendees asked the governor about Uranium mining, hoping he'd flip and support the idea. McAuliffe said much what he said during the 2013 gubernatorial campaign: The risk is too high. Show me some science that says our water will absolutely be protected, and I'll consider it.

Win some, lose some.

Anonymous said…
Folks, please check the location of Clinton on the map. It should be further east.

Anonymous said…
Folks, please re-check the location of Clinton. It's not that far west.