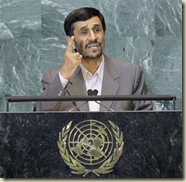 Yesterday, we noted that Libyan President Muammar el-Qaddafi followed President Obama’s speech at the United Nations with a speech that ran about an hour over its quota. We didn’t mention that it drifted in from Cloud Cuckooland with a pit stop in Madville. It did prove the perfect introduction to Iranian President Mahmoud Ahmadinejad, who went into full-on rant mode about Israel and capitalism. It wasn’t a heart warming performance and a lot of the delegates – Western ones, in particular – walked out.

But after the speech, Iran went as far as it has done so far to open the door to negotiating over its nuclear ambitions.

Iran is willing to have its nuclear experts meet with scientists from the United States and other world powers as a confidence-building measure aimed at resolving concerns about Tehran's nuclear program, Iranian President Mahmoud Ahmadinejad said Wednesday.

This might be occurring because some of the bigger countries are talking about more severe sanctions:

On the sidelines of the U.N. General Assembly, President Obama and Russian President Dmitry Medvedev on Wednesday discussed the possibility of what Obama called "serious, additional sanctions," while France's president, Nicolas Sarkozy, told French television that the "dialogue is achieving nothing. There will be a timeline, a date limit. In my mind, it's the month of December."

Medvedev noted that sanctions are “seldom productive,” but having Russia join in might be very productive, given its involvement in Iran’s domestic nuclear energy program.

There’s more to the story, including Iran’s kitten-in-the-oven tale of woe over needing “enriched uranium needed for medical purposes,” so do read the whole thing. Diplomacy and negotiation invite tremendous cynicism – the game playing is just so intense – then again, Iranian statements invite tremendous cynicism, as the speech at the U.N indicated - so bring a pound of salt when talks get underway October 1.

Mahmoud Ahmadinejad. Not from yesterday – he seems to attend a fair amount of U.N. gatherings and, as far as we’ve read, invites a lot of walkouts.

And you say Iran has opened the door? To what? Nuclear war? We must NOT trust a fascist Islamic regime with nuclear weapons. Not now. Not ever. The last time the Persians had great power, they swept away everything from the Ganges to Thrace. Thank God for 300 Spartans that stood in their way. Of course, remembering history has never been a strong point of modern Americans.
September 27, 2009 at 7:29 AM

DeKaN said…
@loannes
"We must NOT trust a fascist Islamic regime with nuclear weapons."

Lolz. Stop being racist dude. As far as we can expect, big countries also had their own nuclear power (read:weapon) to be considered of. While Iran clearly claimed that it was nothing to do with nuclear weapon. We try to look at this matter a positive way by respecting them as further inspection can be done.

Furthermore, if you can say such thing, I can also say something like it is a _____ (fill in the blank with anything on your mind) conspiracy being afraid of an islamic country having massive destruction weapon such as them.