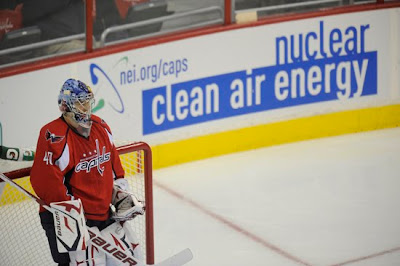 If you've been to Verizon Center to see a Caps preseason game or visited the Kettler Iceplexpractice facility in Arlington, VA recently, then the biscuit is already in the basket this is old news: today NEI officially announced a corporate sponsorship deal with the Washington Capitals. Details of the season-long partnership are in the press release here and include this plum of a quote from Capitals Majority Owner Ted Leonsis:

Nuclear energy is an important part of a technology-based solution to climate change. It's a proven energy provider in Virginia and Maryland for Capitals fans and we are pleased to work with NEI to raise awareness of the role that it can play in reducing greenhouses gases across America.

The ad, "nuclear: clean air energy", will be prominently displayed on the dasherboard in Verizon Center (behind the goal where the Caps shoot twice). In addition, NEI will be promoting the "clean air energy" message on radio, during game broadcasts on WFED; in print ads appearing in the official game program; and on the Web, with ads running on the team's site.

The dasherboard, radio, print and web ads all point to nei.org/caps. This microsite looks at the effects of global warming on outdoor sports (hockey, in particular), highlights the initiatives undertaken by the NHL to raise public awareness about climate change and details the clean air benefits of nuclear energy. Visitors to nei.org/caps can also find an NEI flickr page that will capture game photographs taken throughout the season.

A random, remarkable story: while standing in the beer line between periods at last week's game against Chicago, I overheard two Blackhawks fans talking about seeing Alexander Ovechkin play in person for the first time. Fan A to fan B, "I think Ovechkin is nuclear-powered."

DocForesight said…
Yes, the big "O" is an electrifying player (ahem) and brings the crowd bolt-upright from their seats.

The end-board ads are perfect for their semi-subliminal effect. More action takes place there, especially when defensemen hang out assessing their breakout.
September 30, 2009 at 8:26 PM