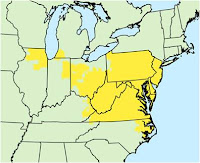 Last week about 30 of us from NEI took a field trip to the PJM Interconnection hub in Valley Forge, PA to learn how the electric grid operates. For those who may not know, the "PJM Interconnection is a regional transmission organization (RTO) that coordinates the movement of wholesale electricity in all or parts of 13 states and the District of Columbia." PJM is currently the world's largest competitive wholesale electricity market and what I find fascinating about the hub is that it can manage the flow of electricity hundreds of miles away.

When we arrived, we had the fortunate opportunity to listen to PJM's CEO give us an overview of their operations as well as allow us to shoot tons of questions at him. After he finished, our other hosts took us to the control room which was located several floors below ground level. Talk about an IT person's dream (or nightmare). Two video walls totaling about 100 feet wide by 30 feet tall display information on power plants, transmission lines, voltage levels, grid frequency, and more. The video walls provide overall situational awareness and are supplemented by PC displays at each of the three major operating “pits." There are usually about 10 operators at all times in the room working in shifts of five every day. 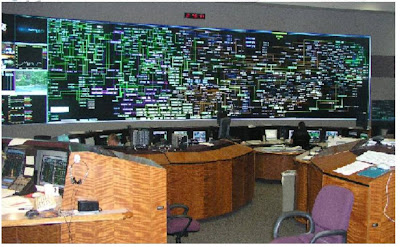 NEI's Tom Kauffman organized our trip and below are quite a few details Jim Slider and I compiled during the event:

PJM Operations and Costs
PJM has about 600 employees and 600 servers (one server for each employee as the host characterized it). The facility costs $100M per year to operate. The total production cost of the generators in PJM was $21B in 2008. PJM operations were said to cost customers about $0.30/MWh. PJM is the “cheapest regional transmission organization (RTO) going.”

Nuclear Plants
There are about 1,500 generators (units) in PJM and 29 of them are nuclear. The 29 nuclear reactors supply about 35% of PJM's electricity. Both coal and nuclear supply 91% of the generation in PJM. And according to one of their slides, "nuclear plants are 'price takers,' meaning they are the lowest cost producers in the market, and are only tangentially involved with real time market operations."

Wind
Off-shore wind on the East coast could be a great resource for PJM because of its close proximity to the Eastern load centers. The operating wind farms in PJM, however, are tougher to manage because of the longer distances to meet load on the East coast (most of the wind farms are in Illinois). PJM could accommodate 8,000-10,000 MW of wind before they would have to reconfigure their operations and build new back-up capacity. PJM bases its calculations of useful wind output on a capacity factor of 13%.

Grid Congestion
The Washington-Baltimore area is short on generation and transmission resources, providing one of the enduring challenges to PJM operations. The proposed Allegheny transmission line (pdf) starting in Pennsylvania, going through West Virginia and ending in Northern Virginia is very much needed so reliable power can continue to be supplied to the “new financial center of the world” (DC).

Load
PJM’s record load of about 148,000 MW occurred in early June about 2 years ago. The peak load during the day is typically about 2X the lowest load at night. Below is an example chart showing a company's typical load profile. 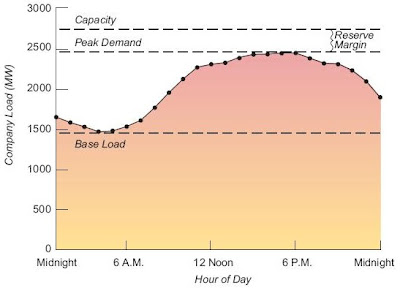 Operators
PJM operators take about 5-6 years to reach “master” status. Most of what they need to know they can learn only on the job and in job-specific training. The six year path to mastery involves a progression from an administrative entry role to the generation role and then into transmission. The operating imperatives are: to serve the load, keep frequency within tolerance, and avoid overloading the high voltage transmission links.

Back-Up
PJM has a separate operations center in Milford that serves as a ready back up to the primary center in King of Prussia. In early 2010, PJM will reconfigure the two centers to operate in parallel continuously, so that “failover” from one to the other is seamless and transparent to the operators. PJM acquired a Cold War era bunker recently and is in the process of preparing that for continuity of operations in the event of a disaster.

Grid Frequency
The North American system is a 60 Hertz frequency system and is maintained between 59.95 and 60.05 Hz. When the frequency rises slightly above 60, grid operators know that they will probably have to ramp down plant capacity on the grid. When it falls below 60, operators need to add more capacity. Frequency excursions occur occasionally, outside the above limits, but normally the Automatic Generation Control (AGC) programs can correct the frequency within 5 minutes. Watching the frequency is also how operators know when brownouts or blackouts may occur.

Wrap-Up
Anyone and everyone involved in the policies and regulations of energy and electricity needs to go to a place like the PJM hub. So much goes into maintaining the grid that if policy makers and regulators don't have an understanding on how the grid works, it could become less reliable or more expensive because of poor policies and regulations. What has become more clear to me after this trip is that there are limits and advantages to every energy source and each could have a role to play. If anyone would like more info, check out this 4 minute clip on how PJM operates, enjoy!