Renewables did not surpass nuclear in 2010

Cleantechnica has a post referencing a report (pdf) from the Worldwatch Institute that claims renewables (wind, solar and biomass) have surpassed nuclear energy. This is only true if we were to look at one metric: capacity additions (megawatts). A more important metric, however, is output (megawatt-hours). Here’s the Institute’s claim (page 4):

In 2010, for the first time, worldwide cumulated installed capacity of wind turbines (193 gigawatts*), biomass and waste-to-energy plants (65 GW), and solar power (43 GW) reached 381 GW, outpacing the installed nuclear capacity of 375 GW prior to the Fukushima disaster.

Good job for those technologies. They still have a long ways to go, however, to be able to match the same output as nuclear.

Below is a chart showing the electric generation fuel shares worldwide from the International Energy Agency’s 2010 Key Stats report (pdf). 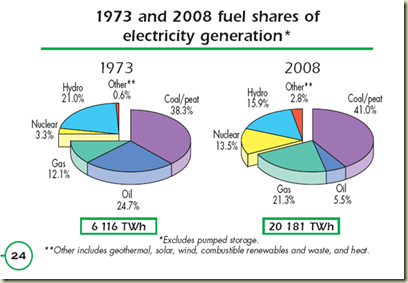 Nuclear provided 13.5% of the world’s electricity in 2008 and renewables provided 2.8% (excluding hydro). The Other category includes the same renewable technologies as the Worldwatch’s report plus a few others. Yet, despite renewables “outpacing” nuclear in capacity in 2010, the actual output was more like one-fifth of nuclear’s output. If renewables were to surpass nuclear in output, then the amount of capacity needed would be almost five times as much.

Further, Cleantechnica and the Worldwatch’s report referenced an analysis from a Duke University professor (prepared for NC WARN) claiming solar is now cheaper than nuclear. The New York Times even picked up on the Duke report. But what they probably missed was that the NY Times had to distance themselves from the analysis and that the actual report had flaws in and of itself.

If Worldwatch wanted to provide a meaningful report, then they should use some of its efforts for analyzing nuclear and apply it to other technologies for comparison. There are a lot of folks who would be interested to know the historical performances of wind, solar and other techs. I’m sure we’d find that other technologies do not have rosy histories either. Otherwise, Worldwatch's annual regurgitation of nuclear statistics does little to provide readers with any perspective.

Update 4/22, 1 pm EDT: I left the following comment at 10 am on two posts at Cleantechnica's site and they haven't shown up yet three hours later. A few other comments have been approved since then. Hmmm...

When it comes to actual production, renewables are far from surpassing nuclear worldwide. Folks here may be interested in a different take: http://neinuclearnotes.blogspot.com/2011/04/renewables-did-not-surpass-nuclear-in.html

Dougtheheadhunter said…
The wind doesn't blow consistantly everywhere and I can't imagine running a Ford plant on solar panels. Coal is a bad word and we've pretty much dammed up everything we can. Is there is any other serious industrial sized power gen option besides nuclear?
April 22, 2011 at 10:34 AM

J Wheeler said…
I posted a similar comment on the story three days ago. They did publish my comment but continued to argue against my assertion that actual output is different than rated capacity.

Either they do not understand the difference between rated capacity and actual output, or they don't care. Then again, perhaps they do understand it, but realize most of their readers won't bother to read beyond the headline.
April 22, 2011 at 2:32 PM

Alan said…
Something isn't right in your analysis. Think about capacity factors. The majority of the capacity number should be wind, but this doesn't make sense. That 2.5% is very small. Think of it this way, use % as a energy unit, representing a percent of 2008 world energy use.

Now, worldwide nuclear capacity factor certainly isn't greater than 90% in the typical measure of generation over capacity. Use this number to get a comparable number from all renewables:

And that's conservatively high, if you use a lower CF for nuclear, the figure is lower. Even the changes 2008-2010 won't affect this much and will err on the high side. Wind power does not have a capacity factor of 15%, it is much higher. This confirms my suspicion, the 2.5% versus 15.9% is somehow not representing what's claimed - two similar capacity ratings.

AH! Found the error. The report includes small hydro. So it is accounted for as hydroelectric generation, which throws off the prior calculation.

However, that's not what they say on the blog. It's "wind turbines, biomass and waste-to-energy plants, and solar power reached".

Thank you for your follow-up to our piece. I'm sorry you had to wait on your comment, but comments with links in them are grabbed by our system and must be moderated -- too much SPAM in the world. other comments were auto-approved by the system.

As I think I made pretty clear in the article (and in comments on our post), the statistic of focus was capacity because that is the statistic where we saw a crossover. When we get to the output crossover, I imagine we will cover that.

I think you don't give the Worldwatch report much credit -- it is a very insightful, thorough report on everything nuclear. Of course, every report has its limits -- while it covered some renewable energy factors (quite well), the focus was nuclear. I think you can understand that. It was actually very useful, I think, that it went above & beyond a typical nuclear report by comparing it so thoroughly and carefully to other energy sources.

Anyway,.. it was nice to run into a continued discussion of our post.

Neil Howes said…
Last time I looked hydro was part of the renewable mix, so in 2008, total renewable power production exceeded nuclear.
But since 2008, 70GW of wind capacity has been added(17GW in China in 2010 alone) and considerable hydro(3 Georges) also added so that total renewable output has certainly increased faster than net nuclear(nuclear may have declined?)
April 24, 2011 at 6:51 PM

And I don't intend to. They've been releasing their annual reports for years and they all try to show poor nuclear performance.

I don't think we're reading the same thing. I couldn't find one benefit of nuclear mentioned in the 80 page report (unless I missed it). One obvious benefit that could have been mentioned is the difference between capacity factors among technologies. Yet the authors neglected any mention of this like it doesn't matter. The high reliable capacity factors of nuclear are a big reason why companies want to build them. That's just one easy benefit that could have been mentioned for balance.
April 25, 2011 at 8:43 AM