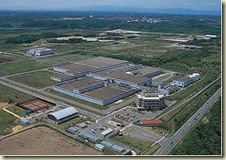 World Nuclear News reports what happened after this morning’s earthquake in Japan.

The Ministry of Economy Trade and Industry (Meti) said that seawater pumping to cool the reactor cores of Fukushima Daiichi 1, 2 and 3 continued after a brief evacuation on a tsunami warning.

The single reactor at Higashidori is offline for maintenance and its full core load of fuel is within the used fuel pond. When power from the grid was disrupted, cooling was maintained by emergency diesel generators. The Rokkasho reprocessing plant also lost grid power and is currently maintained by its diesels.

And that’s what’s supposed to happen in these circumstances. All good.

Polls have been showing some, but not dire, slippage in support for nuclear energy. One should always wait until a crisis is over before polling the crisis, because attitudes are going to be all over the place. It’s hard to really pin down attitudes while the news is full of both fully and half-baked assertions.

The Atlantic’s Nicholas Jackson writes about a social media tool that acts somewhat as a pollster:

Social Radar, a tool developed by Infegy that monitors activity on social media, was used to build a comprehensive report on the feelings surrounding nuclear energy by analyzing conversations across multiple platforms on April 1. The report, released this morning, "shows dramatic shifts and complex attitudes in the public's perception of nuclear energy before and after a massive 9.0 earthquake hit  Japan and caused ongoing problems at the Fukushima Daiichi power plant on March 11, 2001," according to a press release that accompanied the report's publication.

That’s not exactly something you needed a tool to figure that out. But it gets more interesting:

After analyzing more than 40 million "online conversations," Infegy concluded that public perception of nuclear energy prior to the earthquake was high; it took a sharp turn on the 11th. Seventy-six percent of online conversations concerning nuclear energy were positive leading up to March 10, according to the report. By March 13, 62 percent of all conversations were negative. A few days later, public sentiment had evened out a bit, with Infegy's analysis showing a near 50/50 split between negative and positive perception.

I’d probably avoid the idea that social media users are reflective of “public sentiment,” since it’s an amorphous group that does not provide a true cross section of the population. Still, the pattern is the same here as for polls – negative when the events in Japan were at their most active, with moderation following. Jackson is surprised by this:

The most shocking thing about these findings is that the public's perception of nuclear energy has returned so quickly to the positive. And it could be on the rise.

Actually, not the least bit surprising. The news always stresses the worst case scenarios, as it does in any such event, but when these fail to happen, there’s nothing left with which to gin up fear. And nuclear energy ceases to be frightening. See the posts on Pew, Gallup, and Harris for more on polls and polling.