What Happens During a Refueling Outage? 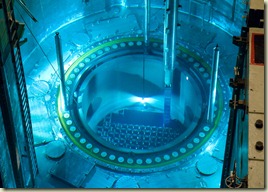 You may have noticed over the past few weeks that a number of nuclear plants are shut down for refueling outages or are resuming operations after just returning from one. This type of routine outage usually occurs in the spring or fall when electricity demand is low so that nuclear reactors can replace about one-third of the spent fuel rods with new fuel and conduct other routine maintenance and repairs at the plant.

To get a better sense of how refueling works at a nuclear energy facility, I spoke with Marcus Nichol, NEI’s senior project manager for used fuel storage and transportation, and asked him to explain the basics.

Why does a nuclear plant need to replace one-third of its fuel?

The main purpose of a refueling outage is to replace older fuel that is depleted—meaning it can no longer efficiently produce energy from nuclear fission reactions—with new fuel. This “used fuel” has typically been used in the reactor for four-and-a-half to six years before it is permanently removed. Although the used fuel still contains useable material within it, meaning it could potentially be reused as fuel for U.S. nuclear reactors, it would need to be reprocessed in a different type of facility before this could occur. The United States currently does not reprocess used nuclear fuel, but some countries like France do this already.

How often does a reactor need to refuel? 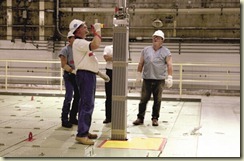 Nuclear plants are usually on an 18-month or 24-month cycle, meaning every 18 or 24 months they must refuel, depending on the particular plant. In the early days in the U.S. nuclear energy industry, most plants were on 12-month cycles, but over the years with better designs and higher enriched fuel, these cycle times have been extended. Also, with reactor design improvements, some nuclear energy facilities are able to harness more energy from the fuel, which leads to more efficiency in the technology. In 2011, the average time it took a facility to conduct a refueling outage was 43 days.

What is the process for refueling?

As you might expect, the process for refueling is different for pressurized water reactors (PWRs) and boiling water reactors (BWRs). In a PWR, typically all of the fuel is removed from the core and placed in a used fuel pool, making it easier to conduct maintenance on the reactor core itself. This process occurs when the fuel assembly is turned on its side and then moved through an underwater canal to the fuel pool, which is usually located in a different building from the reactor. Once all of the fuel is in the fuel pool, the plant workers will remove one-third of the fuel and replace it with the new fuel. They will also conduct what’s called a “core shuffle,” which means the new fuel is intermixed with older fuel—that will continue to power the reactor—in order to ensure efficient use of the fuel. 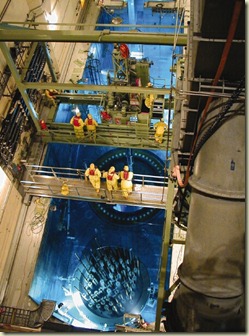 In a BWR, the reactor operators typically do not remove all of the fuel—only the used fuel. This saves time, especially since BWRs have more fuel assemblies than PWRs. During the refueling process, the used fuel is pulled out of the reactor from the top and is placed in the spent fuel pool, which in most BWRs is located next to the reactor. The operators then conduct the core shuffle and insert the new fuel.

Throughout the entire refueling process at a nuclear energy facility, the Nuclear Regulatory Commission’s resident inspectors on site monitor all activities to ensure that they are safely being performed as part of their normal oversight functions.

Where does the new fuel come from?

The new fuel is ordered from the fuel vendor before the reactor goes into its outage. Once it arrives at the facility, it is stored safely on site in new fuel vaults or in pools.

What maintenance is conducted on the nuclear plant during the refueling outage? 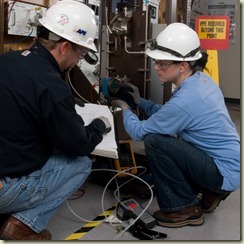 During a refueling outage, plant workers have greater access to many areas of the plant that are sometimes difficult to access during normal operations, such as areas close to the reactor core. This lends itself to being a great opportunity to conduct routine inspections and maintenance and perform any necessary repairs.

The type of maintenance that is conducted varies by plant, but an example includes inspecting or testing pumps and valves to ensure that they are working properly. The utility will place many of these routine maintenance activities on a schedule so that certain equipment and instrumentation is evaluated each refueling outage, whereas others may only need to be inspected every other outage or less frequently depending on their functions.

If a nuclear energy facility has two reactors on site, will they perform refueling on both reactors during an outage?

Although a utility could potentially perform refueling on two reactors at a time, it is generally not done for two reasons. First, a refueling outage requires a large amount of resources. Typically, about 2,000 contract workers are brought on site to support the outage, allowing the utility to work continuously 24/7 until the outage is complete.

Second, nuclear energy facilities provide baseload electricity—meaning they pump out electricity around-the-clock—and when they are not operating, it is difficult and costly for the utility to purchase electricity from other sources, sometimes in other states. This is another reason why utilities conduct refueling in the spring or fall when electricity demand is generally low, so that it minimizes the impact to the electricity grid.

When the contract workers come to the site to support the refueling outage, how are they trained?

In general, the contract workers are highly trained and go from plant site to plant site to assist in refueling outages. Once they come to a nuclear energy facility, they are also trained on any site-specific requirements and must adhere to all of the same processes and procedures as the plant’s full-time workers. They are closely monitored to ensure that they are safe and adhere to all NRC regulations.

Thanks to Marc, I think the mystery on how nuclear plants refuel is now solved! Hopefully this Q&A helps others to understand this process a bit more, but feel free to submit a question if you have any other follow-up questions.

For more information on how nuclear fuel is produced, used and stored, see NEI’s interactive graphic.

Image #2 is a picture of employees inspecting the new fuel assembly that will be used during refueling at Comanche Peak nuclear plant.

Image #3 is a panoramic shot of a reactor core reload from above Comanche Peak nuclear plant.

Image #4 is a picture of employees performing maintenance during a 2008 refueling outage at Palo Verde nuclear station.

Anonymous said…
Full core offload may sometimes be done, but I wouldn't say it is 'typical' at PWRs anymore. Also, the number of assemblies replaced with new fuel is closer to 1/2 these days, the 1/3 number was more true for the 12 month cycles in the old days.
May 9, 2012 at 8:15 AM

Anonymous said…
Have yet to find a PWR plant were complete offload does not occur. Typically, due to the constraints placed on PWRs through plant design, a full off load is necessary to complete other inspections during the refueling outage.
May 13, 2015 at 11:00 AM

Anonymous said…
Are you a refueler? What US PWR doesn't do core offload, replace about 1/3 of the fuel, and how long has it been since they were on 12 month cycles. I believe someone has misinformed you. Source: It's my job.
June 4, 2015 at 7:33 AM

Anonymous said…
Forgive me for sounding naive, but the explanation made it seem like a marine-grade main engine overhaul would encompass a lot of similarities with that of a nuclear reactor... (With the factor of safety and security exponentially magnified)
Is this a applicable statement?

Also, what happens to the spent/used fuel rods? (If reused/recycled, how?)

Anonymous said…
I agree that the first statement is grossly misinformed. Not doing a full unload (Partial Discharge in France) requires In-core shuffling and for this to work you will omit most of your fuel inspection (if you have detected any fuel failures detected onload, this is impossible) and you need to have VERY VERY low levels of fuel bow. Which, if you optimise fuel burn-up, is hard to avoid. The time spent trying to manipulate the core back together with in-core shuffling with bowed fuel has been demonstrated time and time again to negate the theoretic time gains. The German's can pull it off but their KONVOI fuel route is very different from most PWRs from my experience, the U.S, Belgians, Brits and French have opted out due to its difficulties in Practice.
July 24, 2015 at 6:33 AM