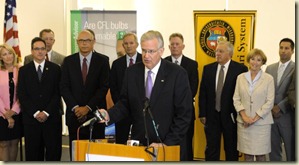 Vying for federal funds to support a potential small reactor demonstration project in the state, Missouri Gov. Jay Nixon (D) joined more than 20 business leaders, utility executives and state politicians Monday to reinforce his support for the project. Speaking from the University of Missouri campus, Gov. Nixon said that the potential project by Westinghouse Electric Co. and Ameren Missouri could “spark a new global industry” and be “transformational” for the Show-Me State.

PoliticMo has the highlights from the press conference:

“The returns of this industry are potentially tremendous,” Nixon said, noting impact on the construction, restaurant, and transportation infrastructure in the state. “When it comes to creating jobs, transforming our economy and building our future, projects just don’t get any bigger than this.”

Nixon said public sector funds — including over $450 million available from the federal government — will help get the emerging industry off the ground, and he said the stakeholders involved want that to happen in Missouri.

“This energy industry is going to emerge,” Nixon said. “The question is who is going to lead.”

To solidify his support, Gov. Nixon has created a new task force that will be charged with aligning the involved communities and ensuring that the infrastructure and other needs are in place if the time comes that they are required. The task force will be headed by Dan Atwill, Boone County’s presiding commissioner, and comprised of five other commissioners who represent the impacted counties.

Many state lawmakers, business leaders, labor unions and chambers of commerce have already expressed an interest in the project coming to the state. The Columbia Daily Tribune reports:

More than 500 letters supporting Missouri’s proposal have been submitted to the DOE [Department of Energy], not only from those directly affected but also from Missouri business and development leaders who see the potential, Nixon said. All of Missouri’s other electric power providers have expressed support as well.

Developing the project will stimulate the state’s economy by creating a large number of jobs, said Ameren Missouri’s President and Chief Executive Warner Baxter. He said that just one small reactor could provide more than 9,500 direct jobs and more than 9,000 indirect jobs, having a $3 million economic impact for the state.

“We’re bringing together national economic leaders, industry leaders, certainly business leaders are here, statewide legislators, as well as labor to come together to discuss a transformational opportunity to secure our state’s and our country’s energy and economic future,” he [Baxter] told the summit.

The state, which would add up to five small reactors at Ameren’s Callaway nuclear energy facility as part of its proposal, is among four finalists that are looking to receive a share of DOE’s $452 million for the public-private program to design, build and operate the next generation nuclear reactor. Other states where companies have expressed an interest in developing a small reactor as part of the cost-share program include South Carolina, Washington and Tennessee.

DOE is expected to announce the grant recipients by September.