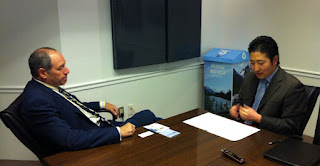 At the beginning of June, I recorded a short video with Dan Lipman, Senior Vice President with Westinghouse Electric Company, concerning the need for Congress to renew an agreement for peaceful cooperation on nuclear energy between the U.S. and South Korea.

Without these arrangements -- known as 123 agreements -- the ability of companies like Westinghouse to export nuclear technology around the world would be severely compromised.

Just a few weeks later, Dan had an opportunity to return to that same topic when he was interviewed by Alan Ahn of the Global America Business Institute. You can listen to the 28-minute interview by clicking the player below.

It was in 2009 that a Korean government consortium led by KEPCO won a contract to build four nuclear reactors in the United Arab Emirates. Just last week, the UAE's Federal Authority for Nuclear Regulation awarded the construction license for the first of those four reactors. As Dan explained in the interview, although the KEPCO consortium won the contract to build those reactors, it still needs to rely on Westinghouse as a subcontractor -- hence the urgency in getting the 123 agreement renewed in a timely fashion.

Bill said…
"Just last week, the UAE's Federal Authority for Nuclear Regulation awarded the construction license for the first of those four reactors."