“If anybody has been harboring doubts about the status of U.S. leadership in space, well, there’s a one-ton, automobile-size piece of American ingenuity, and it’s sitting on the surface of Mars right now.” 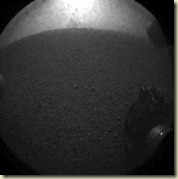 This statement came from John Holdren, President Obama’s science advisor, this morning following the landing of a 2,000-pound nuclear-powered space rover, Curiosity, on the surface of Mars. This marks the first time that NASA has ever safely landed a human-made object of this size and weight on the surface of Mars, a notable feat in American engineering.

Early reports from The New York Times describes the rover’s landing on the Red Planet like a scene in a movie script:


As the drama of the landing unfolded, each step proceeded without flaw. The capsule entered the atmosphere at the appointed time, with thrusters guiding it toward the crater. The parachute deployed. Then the rover and rocket stage dropped away from the parachute and began a powered descent toward the surface, and the sky crane maneuver worked as designed.

Two minutes later, the first image popped onto video screens — a grainy, 64-pixel-by-64-pixel black-and-white image that showed one of the rover’s wheels and the Martian horizon. A few minutes later, a clearer version appeared, and then came another image from the other side of the rover.

This pivotal moment in space exploration is even more exciting because of the far-reaching implications Curiosity’s mission has for the nuclear energy field. The space rover is fully outfitted with an advanced nuclear power system called the Multi-Mission Radioisotope Thermoelectric Generator, or MMRTG (for those who like acronyms), to power its large frame over the two-year mission. 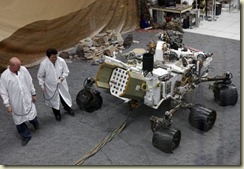 Ashwin Vasavada, deputy project scientist for the Mars Science Laboratory, explains that Curiosity needed a good, strong, reliable source of power to keep it going over its two-year mission. Other Mars Exploration Rovers—Spirit and Opportunity—have used solar panels for a source of power, but the engineers have found that they did not have enough power at times to complete their objectives because of dust settling on the panels or during the short days of winter. With Curiosity measuring two times bigger, five times heavier, and holding 15 times the weight in scientific equipment than the former space rovers, Vasavada said that the space rover needed a power generator that would be guaranteed to charge its battery year-round in all types of harsh conditions, which is why the laboratory turned to nuclear energy.

Curiosity’s generator serves a dual purpose: it provides electrical power and heat to the rover. The generator has a capacity of 110 watts of electrical power, which is used to continuously charge the rover’s battery and keep the rover moving and operating its technical devices. The heat that is created can then be pumped off using pipes, but maintain the warmth on the inside of the rover, including the scientific instruments.

Vasavada explains the reasons for selecting the nuclear-powered generator and how it works in the following video:


For a more technical explanation on how the generator works, see this description by Canadian Energy Issues:


Curiosity’s electronics are powered by what’s called a radioisotope thermoelectric generator (RTG). An RTG is a device that uses the heat from disintegrating radioisotopes to generate an electric current. In Curiosity’s case the radioisotope is plutonium-238, a strong alpha emitter with a half-life of around 88 years. A disintegrating Pu-238 atom ejects an alpha particle from its nucleus with an energy of 5.5 million electron volts. The ensuing collision between that ultra-high-energy particle and the first material it encounters generates a lot of heat.

All missions to Mars and beyond are powered with Pu-238. By the time you get out to Mars, solar energy is too weak to generate meaningful amounts of electricity.

Over the course of its mission, Curiosity will be searching for indications that Mars was once habitable, such as examining rocks and other organic matter and sending images and samples back to Earth. The Washington Post says this is the first time NASA has embarked on a mission to Mars since the Viking missions in the 1970s. Since then, scientists have discovered that the planet was once wetter and warmer, which signals improved possibilities for life on the planet.

Have thoughts to share about Curiosity? Join the conversation about the space rover on NEI’s Facebook page.

For more information on nuclear energy’s applications in outer space, see NEI’s website.
---
Photo captions: Image #1: One of the first test images from NASA’s space rover Curiosity upon landing on Mars to signal that everything was operational (credits: NASA TV, via The New York Times).

jim said…
My hat’s off to NASA/JPL too and can’t wait till the lab starts rolling!
This is also a magical time for NASA to really start mentioning that Curiosity is nuclear powered to the visitors to its facilities to help de-Darth Vaderize a source of energy. At the Smithsonian, they just couldn’t mention enough over models of Spirit and Opportunity that they were solar powered. This is where nuclear energy can positively shine to the public in a friendly way, and NASA shouldn’t act grudging to mention it!

Marcel F. Williams said…
Plutonium-238 also powered the Voyager spacecraft that gave us the spectacular images of Jupiter, Saturn, Uranus, Neptune, and several of their moons.

So plutonium 238 has had a long history as a beneficial source of energy for space exploration.

richardw said…
Yeah a RTG on another planet is great.

As long as it leaves earth in one piece then I am all for it.

Go de-darth vaderise something else though, cause this is nowhere near the same thing as earth based nuclear power tech.
August 7, 2012 at 1:58 AM

This is not personal, I'm just looking for info leads. Can you tell me -- specifically if possible -- where you obtained your views on things nuclear? I'd just like to trace and examine info sources, that's all.

Engineer-Poet said…
Sadly, it looks like richardw just made a drive-by and isn't going to respond.  I'd love to see his reading list.

I don't think he quite gets the irony of his adjuration that we "de-darth vaderise something else".  Darth Vader is a fictional character, acted by various guys in a black costume and voiced by James Earl Jones.  The parallel to the designation of nuclear power as "the bad guy" is spot-on.
August 9, 2012 at 8:51 AM