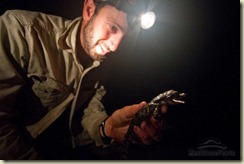 The AP has an interesting story making the rounds about Florida’s Turkey Point nuclear energy facility. At first, I thought to call this post something like Unintended Consequences, because what’s happening there could seem a consequence of the facility being where it is. But really, it’s more than that, because Turkey Point, which is run by FPL, has taken an active hand in enhancing what is happening there. The good work there is active, not passive.

There are between 1,500 and 2,000 crocodiles in Florida — 40 years ago there were 300. They are listed as an endangered species by the state, but were downgraded a few years ago to "threatened" on the federal list.

And that’s because of Turkey Point:

Since the croc monitoring program began at the plant in 1978, some 5,000 hatchlings have been captured and marked. [Tukey Point biologist Mario] Aldecoa said that indicates that some female crocodiles are returning year after year to the habitat surrounding Turkey Point to lay their eggs.

And what does the presence of the facility have to do with this? There are two factors. The first is about the plant’s operation:

Its [Turkey Point’s] cooling canals are prime croc habitat and have been credited with helping the crocodiles' recovery in Florida over the last few decades.

And second, there are FPL’s efforts to foster and support the recovery:

Aldecoa is part of a group hired by the state's largest public utility, Florida Power and Light, to monitor the hundreds of crocodiles that roam the swamps surrounding the plant.

Good neighbor policies on the part of business and industry are not new, and many many nuclear energy facilities put a high priority on being good stewards of the land around them and the animals that call the facilities home, but I doubt FPL knew the crocodile expansion would happen until it started happening – so it seems remarkable that it decided to put considerable effort and resources into making sure it continued along a positive path.

Aldecoa and his group search out baby crocs, measure them, affix microchips on them for tracking (many of them end up in adult crocs’ bellies) and help the state keep records on them:

He [Aldecoa] had searched weeks earlier for hatchlings at a spot where he was sure he would find a nest but came up empty. Once he started pounding on the dirt, the grunting from underground began. He dug up 34 crocodiles, "the highlight of the year so far," he said.

The story by Suzette Laboy is very good. By all means, take a read.

If you want to know more about the return of the crocodile in Florida, try Crocdocs, a site run by the University of Florida. From the site:

The American crocodile has made a comeback in South Florida in areas where suitable habitat remains and in some areas where habitat modification has made it more attractive to crocodiles. Nesting habitat was inadvertently created through construction activities at the Turkey Point Power Plant site, at Crocodile Lake National Wildlife Refuge and other locations has to some extent compensated for the loss of nesting habitat elsewhere.

Inadvertent – there’s that word again. And of course, they recognize that the croc population increase has its downside:

Although the presence of crocodiles throughout south Florida is good news for this endangered species, it does present challenges for land and water managers. As crocodiles continue to increase in number and occupy new areas, encounters with humans will increase, thus, more complaints. Therefore we need a proactive educational program describing the recovery of this endangered species. This knowledge could be used to prepare people for the arrival of crocodiles into new areas and aid in the continuation of what is currently a successful recovery program.

I think this is a little overstated – remember, 3000 crocodiles in Florida, about 1.3 million alligators.

A company I worked for had a warehouse in Florida that often attracted alligators to its air conditioning vents, something that erecting fences around the vents could not prevent. Once, an alligator strode right through the front door of the warehouse, causing considerable, shall we say, consternation.

Living with creatures that eye you as food and aren’t always shy about letting you know it certainly provides challenges. Consider it a codicil to the proposition that humans have dominion over the fishes, the fowls and the beasts.

Now, if I ran Turkey Point, I’d make some hay out of this. This is a genuinely terrific initiative and no amount of cynicism about corporate motivation can make it less so – this is a uncomplicatedly benevolent activity – so why not tout it?

Maybe FPL is classier than I am. It’s actually pretty low key:

About nine-tenths of the Turkey Point property remains in its natural state of mangroves and fresh water wetlands. There are more than 60 known species of birds and animals that inhabit the property. Of these, 17 are endangered.

The endangered American crocodile enjoys a favorable habitat in the plant cooling canal system. We protect the crocodile and conduct research by counting crocodile nests annually to record population changes. More than 3,000 crocodiles have been marked and released, and FPL is committed to continuing protection of the species while encouraging ongoing public education.

FPL is also involved in the Florida Everglades Mitigation Bank. We are returning nearly 13,500 acres of wetlands to their natural, historical condition. We preserve this area to best serve Florida citizens and our own company goals because of the site's ecological value.

Turkey Point was recognized with the top industry award for land management and environmental stewardship.

A salute then to Turkey Point and FPL. Good neighbors, good stewards of the land, a friend to crocs and modest about it, too. Oh – it also produces a lot of electricity, I hear.

This work has been covered quite a bit. Check here (complete with slideshow!), here (video) and here for more.

jim said…
I know this sounds kind of low and non-PC, but why doesn't Turkey Point expand its earnings and down-home public friendliness by creating a on-property crocodile farm to run a gator burger outlet and gator leather goods store? Provided they're protected since hatchlings, crocs breed like rabbits. The novelty of buying a nuke farm "Croc In The Box" burger would take the cold aloof shine off the plant and providing raw gator leather goods would turn a neat profit and popularize the plant and warm up nuclear's image like no one's business! I mean, com'on, with all those excess gators loafing around, does everyone have to run a PC wildlife habitat??

Anonymous said…
Either Mr,. Greenidge forgot the words "endangered/threatened species" in the main post, or he forgot to use the /sarcasm tag.
August 12, 2012 at 6:50 AM