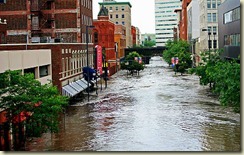 What becomes nuclear energy most? Many things, but surely, most of all, It has to be safety. The accident in Japan might have made this seem a folly – at first – but polls, and early ones, showed that people in the U.S. understand that the accident there was extraordinary and not reflective of the safety of U.S. plants.

That doesn’t mean that the Fukushima accident did not lead to a drive to improve safety, especially in the area of natural disasters such as the mammoth earthquake and flooding (the United States is not prone to tsunami per se) that overtook Fukushima. But there are other issues, too, including evacuation and access to resources to mitigate harm.

A lot of lessons are emerging from Japan and the industry and Nuclear Regulatory Commission take them very seriously.

So – then – how effective are efforts to protect against events that haven’t happened?

Let’s consider the experience of Cedar Rapids, which is about 50 miles from the Duane Arnold facility. No, there was no accident at Duane Arnold, but there was plenty of preparation for an accident.

But I don’t want to get ahead of myself. Here’s what happened:

In May and early June 2008, tornadoes and floods struck Iowa. The largest single tornado in the state in a 30-year period, an EF-54, struck the town of Parkersburg, Iowa, 85 miles northwest of Cedar Rapids on May 25 and caused millions of dollars in damage, eight deaths, and the mobilization of significant state and local emergency response resources.

Believe it or not, it gets worse and threatens the kind of double disaster that flattened the northeast section of Japan:

The water levels in the Cedar and nearby Iowa Rivers and their tributaries had risen throughout the spring as the agricultural land that covers 74% of the state, still saturated from the heavy winter snow melt and without crop cover, together with an extensive network of subsurface clay drainage tile systems, contributed extensive runoff into the rivers.

This is all from a report called Disaster Resilience recently published by the National Academy of Sciences, which explains the precision of the details. We’ll talk about resilience and what the report means by it a little later.

The narrative goes on to say that the Cedar River did not produce a “100-year flood,” as feared, but a “500-year” flood, much worse – that is, a flood that could be expected to happen only every 500 years. The Cedar River crested at over 31 feet.

What Cedar Rapids needed was an effective risk mitigation strategy, most particularly the risk to people needed to be minimized. Happily, the city already had such a plan; beyond that, essential personnel had drilled on the plan many times.

The city and county have a risk mitigation strategy in place for the nuclear power facility: the city’s emergency planners, hospital personnel, and citizens drill four times a year along established evacuation routes. These drills, including the relocation of essential medical facilities and personnel proved essential during the response to the flooding of the Cedar River into the city in the second week of June 2008.

According to the health personnel and emergency responders with whom the committee spoke in their visit to Cedar Rapids, the preparation and planning involved in preparing for that single, human-induced hazard played a large role in the fact that no lives were lost to a different hazard that evolved into a disaster during the flooding in 2008.

I think the reference to a nuclear accident as a “human-induced hazard” means that people erected the plant not that employees there would cause an accident and, by contrast, the flood was a natural disaster.

So, in this instance, an emergency plan intended to keep people well away from radiation kept them equally well away from water run wild – and, let’s repeat from the NAS report, “no lives were lost.” (It is fair to add that, industrial accidents aside, no one died at Fukushima Daiichi, either. But it’s also not fair to minimize the impact of what happened there, so let’s keep the point parenthetical.)

Now, the NAS report is largely about natural disasters and the subject of the report is resilience in the face of them. The report defines resilience thusly:

Resilience: The ability to prepare and plan for, absorb, recover from or more successfully adapt to actual or potential adverse events

Which sounds very much like what the nuclear energy industry is doing.

In the report’s terms, the benefits of preparing for “adverse events” is not only good for mitigating harm to life and property, it even makes sense economically.

For example, the Multi-Hazard Mitigation Council (2005)
found that for every dollar spent on pre-event mitigation related to earthquakes, wind, and flooding, about $4 were saved in post-event damages. Furthermore, the planning and preparation for one type of disaster (such as the nuclear accident planning experience in Cedar Rapids, Iowa), can reap benefits for other types of disasters or unexpected adverse events.

If it seems tacky to bring up money, consider it instead as a finite resource. Draining those resources in the face of one disaster will lead to a lack of resources for the next disaster. And we seem to face more natural disasters in recent years, not fewer.

In fact, the report is really dour about the nation’s preparedness for natural disasters.

An alternative to the resilience vision is the current path of the nation—the status quo in which innovations are not made to increase the nation’s resilience to hazards and disasters. Unless this current path in the nation’s approach towards hazards and disasters is changed, data suggest that the cost of disasters will continue to rise both in absolute dollar amounts and in the losses to the social, cultural, and environmental systems that are part of each community.

It seems to me very striking that a nuclear accident mitigation plan proved so effective in preventing loss of life and limb in a natural disaster. (And it happened in 2008, three years before the accident in Japan.)

The cost of preparing that plan and of working out the kinks in it through drills – to the nuclear industry and to federal, state and local government agencies – paid off is a big way – and in exactly the way it should have, albeit not in response to a nuclear accident – and to the universal benefit of the people of Cedar Rapids.

The NAS report is long enough that I could have missed it, but it  seems that the nuclear energy industry points some useful directions for natural disaster planning that could be more widely adopted – even if it was created to mitigate the effects of a “man-made hazard.”

So - what becomes nuclear energy most? Safety – and the experience of Cedar Rapids.

jim said…
I wonder whether oil and gas and chemical facilities are obliged to furnish evacuation procedures and alarms as a basis for their licenses and operations since their accidents killed and injured FAR more workers and public and more frequently than nuclear plants collectively ever have, but I suspect the hypocritical crickets have it on this little issue.

Anonymous said…
This was not the first time Cedar Rapids leveraged the expertise gained from participating in Duane Arnold Emergency Preparedness drills. In 1985 an old sewage treatment plant on the edge of town caught fire and the burning plastic within caused a toxic cloud to blow over a significant portion of the city. Elements of the Emergency Plan were activated to efficiently evacuate 10,000 residents.
August 7, 2012 at 10:13 PM

Rod Adams said…
Mark - there are a couple of lines in your excellent post that make me wonder a bit.

Why is it "unfair" to truthfully state that no one was harmed by radiation emitted from Fukushima Daiichi? That is not "minimizing" the impact of the event, but working to avoid the maximizing of the event being perpetrated by nuclear energy's haters - including the competition that hates trying to beat us on objective measures like O&M (incl fuel) cost or emissions per kilowatt hour.

What is "tacky" about money? Money is the fungible resource that businesses have been formed to produce for their investors. It is the resource that makes the difference between comfort and squalor.

The nuclear industry must stop putting on the hair shirt and apologizing to people for what we do. We produce a high quality product called electricity. That product is so important that it makes the news when delivery is interrupted for more than a few minutes at a time.
August 10, 2012 at 4:33 AM