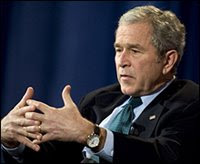 Making the rounds in his farewell tour, President Bush stopped by the American Enterprise Institute yesterday afternoon and was asked about the progress of the nuclear renaissance during his administration.

Mr. DeMuth: Let me ask you two questions, if I may, about energy policy. The first is, are you satisfied with the progress in recent years in reviving nuclear energy? The second is about ethanol. The question says, "Ethanol subsidies are popular with politicians of both parties, but not with ordinary folk outside the state of Iowa." (Laughter.) Does this have something to do with the timing of the first presidential primary?

The President: Sounds like some of my friends in Texas asking that question. (Laughter.)

Mr. DeMuth: You can talk about nuclear power.

The President: Yes. (Laughter.) The country needs to overcome its fear about nuclear power if we want to have ample electricity so we can grow and be good stewards of the environment.

Part of the problem with nuclear power was that the regulatory scheme was such that people would risk a lot of capital and then have to seek permission for final approval late in the process, and would find themselves tied up in a court of law. And so they had enormous capital spent, earning no money, waiting for permission to build the plant. And therefore, capital chose not to go into the nuclear industry.

In terms of safety, the engineering has changed dramatically from the past, and I think people who are objective on this issue would tell you that nuclear power plants are very safe.

In terms of regulatory relief, as a result of the last energy bill I signed -- I think it's the last energy bill -- we began to streamline the process, and as well was we provided some insurance incentives for people to start building. I'm satisfied that we're beginning to change the environment. I'm satisfied that more Americans understand why we ought to be using nuclear power. I am pleased that there are I think, like, 13 permits that have been on application. And I am pleased that some plants are beginning to expand on their current footprint.

I am not pleased about how slow we're moving overall, though. I think we ought to really get after nuclear power, I mean, if we really want to solve our dependency upon foreign energy.

What's going to happen is, by the way, the technologies will help change our habits. For example, there's going to be battery technologies in automobiles that will enable people to drive the first 40 miles on electricity. And everybody is going to -- oh, that's great, hybrid plug-in batteries. The question will be, where do we get the electricity? And it's very important to pursue nuclear energy.

Secondly, I'm a big supporter -- I presume I'm one of those guys you were talking about on pandering to the corn -- actually, I think it's important -- I felt it was important to begin a diversification of our energy sources. And whether or not the ethanol market will stay viable, I don't know, but it has certainly become a relatively significant part of our mix right now. And I laid out a mandatory goal that we ought to head toward because I'd rather have our farmers growing our energy than rely upon certain parts of the world that don't like us.

It's a fascinating interview. The full text is here, though I highly recommend watching the video here, compliments of C-SPAN.

Anonymous said…
Under President Bush we have had numerous license extensions, restart of a mothballed TVA plant, work on restarting another mothballed TVA plant, numerous COL applications for new reactors, etc. Unlike his predecessor Clinton, President Bush has been avidly and openly pro-nuclear power, and one of the best friends that the nuclear industry could have possibly had. Obama won't fall into the same category, and pretending otherwise is simply self-deceiving.
December 19, 2008 at 12:31 PM