How Bangladesh Is Moving Forward 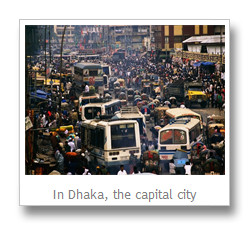 One benefit of nuclear energy that does not get much play is the way its deployment can lead to rapid industrialization in developing nations – maybe a better way to put this is, it can help bring about an industrial revolution. Even better, for those parts of the world that take advantage of this, it allows for rapid industrialization without adding to carbon emission issues.

Consider this BBC profile of Bangladesh:

Poverty is deep and widespread; almost half of the population live on less than one dollar a day. However, Bangladesh has reduced population growth and improved health and education.

The country is trying to diversify its economy, with industrial development a priority. Overseas investors have pumped money into manufacturing and the energy sector.

The plants - each with a capacity of 1,000 megawatts - are being constructed with Russian help as Bangladesh looks to close a yawning power deficit.

I believe the facility will be called Rippur.

According to the CIA World Factbook, the country now gets 95 percent of its electricity (about 5.8 million kilowatts in 2009) from fossil fuels. The nuclear reactors will reduce this percentage immediately, even if they do not replace any other kind of facility. (I ran into stories talking about renewable energy in Bangladesh, but aside from hydro, this is all nascent.)

But the facility might replace a few older plants:

Erratic electricity supplies have been blamed for hampering industrial production and economic growth.

I can’t help but think that a nuclear facility would be safer, too. “Dilapidated” is not the word you want applied to your power station.

Bill said…
"I believe the facility will be called Rippur."

By NEI Digital Team December 18, 2017
For more than 100 years, the shape and location of human settlements has been defined in large part by energy and water. Cities grew up near natural resources like hydropower, and near water for agricultural, industrial and household use. So what would the world look like with a new generation of small nuclear reactors that could provide abundant, clean energy for electricity, water pumping and desalination and industrial processes? Hard to say with precision, but Third Way , the non-partisan think tank, asked the design team at the Washington, D.C. office of Gensler & Associates , an architecture and interior design firm that specializes in sustainable projects like a complex that houses the NFL’s Dallas Cowboys. The talented designers saw a blooming desert and a cozy arctic village, an old urban mill re-purposed as an energy producer, a data center that integrates solar panels on its sprawling flat roofs, a naval base and a humming transit hub. In the converted mill, high
Post a Comment
Read more