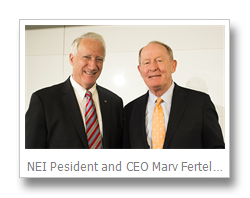 Sen. Lamar Alexander’s (R-Tenn.) speech at NEI outlined the reasons he thinks nuclear energy needs to be bolstered in the United States. He started with climate change, and interestingly, he imagined a United States without nuclear energy by looking at two countries that have foresworn it and one that has embraced it.

The three-term senator, who also served as Governor of Tennessee through most of the Reagan years, compared the German situation with that of the UAE, which included a number of factoids I hadn’t seen put together quite this way:

In just 12 years after notifying the International Atomic Energy Agency of its intent to install nuclear power, the Emirates will have completed four reactors, which will provide nearly 25 percent of its annual electricity by 2020. This is a nearly three-and-a-half times faster increase in emission-free green power than Germany has accomplished with wind and solar.

It is true that four reactors at one site will change UAE’s emissions profile from its electricity sector considerably for the positive and that the best Germany can expect – and it’s a lot to expect - is a one-to-one swap on carbon emissions – that gobbles up a lot of land - and at a miserably high cost to ratepayers.

The cost of generating electricity in Japan has increased 56 percent since they began shutting down their reactors in 2011. In June 2014 three major business organizations – the Japan Business Federation (Keidanren), the Japan Chamber of Commerce and Industry, and the Japan Association of Corporate Executives (Keizai Doyukai) – submitted a written proposal to the Industry Minister seeking an early restart of the nuclear reactors. “The top priority in energy policy is a quick return to inexpensive and stable supplies of electricity,” they said.

It sort of speaks for itself, doesn’t it? And I have to give credit to Alexander for his knack for finding colorful detail:

A Wall Street Journal article said the Japanese have turned their air conditioners up to 82 degrees in order to cut back on electricity use – which would be fine except thousands of people have gone to the hospital with heatstroke. The emperor and empress have even been wandering around the Imperial Palace at night with flashlights and candles.

Alexander’s plan for U.S. nuclear energy is perfectly sensible and a reasonable roadmap. We’ll have to wait for legislation and hearings and votes to see how it all works out, but it’s worth the work. Here’s the outline of Alexander’s plan:

No. 2) Solve the nuclear waste stalemate

No. 3) Relieve the burdens of excessive regulation – we should note that this is not a stalking horse for any anti-regulatory zeal on Alexander’s or the industry’s part. NEI has argued that regulation needs to  focus on public and plant safety and that the NRC’s capacity to regulate beyond those issues can sap resources where they are needed most – which is, of course, public and plant safety.

No. 4) Stop picking winners and losers

No. 6) Encourage energy diversity – we’ve been making this case using last year’s polar vortex as a demonstration of diversity’s value. Alexander takes a broader approach: “Historically, natural gas prices have a way of going up and down, sometimes abruptly, and experienced utility managers generally prefer more than one way of producing reliable, base-load power.” Choice equals options and options in the energy sphere is a natural good.

You can watch Alexander’s speech in the post below and on YouTube. You can also read the transcript of the speech here. I understand the senator will be sitting for a few additional questions for an NEI-produced video. Keep an eye for that on the YouTube page – subscribing to NEI’s feed makes that easy, as YouTube will send you emails when the page updates – and we’ll let you know here when it’s posted. NEI has posted a press release here.

Atomikrabbit said…
If Sen Alexander decided to run for President again, how much financial support would NEI or its members be willing to contribute to his campaign?

I'd wager certain fossil fuel interests would readily open their wallets to his opponent.
February 7, 2015 at 1:06 PM