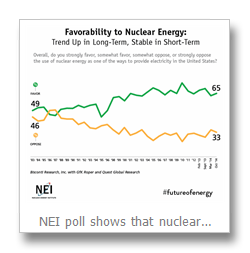 We have to hand it to the Natural Resources Defense Council. Their recent poll tries as hard as it can, but it can’t quite hide the truth about Illinois energy and its relative cleanliness, the subject of the poll.

It finds, quite reasonably, that people there are much in favor of clean energy, which NRDC is quite sure includes only renewables. Why should that be, I wondered – well, until I looked at the questions.

This is one of them:

Some people/other people say we should transition to more clean, renewable energy sources like wind and solar power in Illinois. Illinois residents already get most of their electricity with nuclear power; the last thing we need is more safety risks from building more nuclear plants.

This is part of another question.

We already have more nuclear energy than any other state, and it is too risky for our health and environment.

Yet, even with statements like that to ponder, 33 percent of respondents favor expanding nuclear energy in the state. Frankly, we expected pitchforks and hot tar, so this was surprisingly high.

Another finding asks respondents to choose their favored energy resource for an Illinois climate change reduction plan and doesn’t  include nuclear energy as a choice. It just doesn’t rate.

Obviously, this comes as close to useless as any poll on this subject could be. Numbers can always be turned to just about any purpose – polls complicate this because the numbers hide behind questions that can be fairly ridiculous. NRDC does this by associating nuclear energy with environmental and health impacts that it hasn’t had. “Would you vote for so-and-so, convicted kitten killer?” has about as much validity. It’s to NRDC’s credit that it posted the findings of its polling firm, Public Opinion Strategies, but it just makes the results look horribly skewed. And NRDC has really fouled the pot.

I can’t speak to NRDC’s motivation in taking this approach, but it does come on the heels of other  news. Recent legislation in the state house includes nuclear energy in the state’s clean air portfolio, because, after all, it really does produce no emissions, which is what the standard is all about. NRDC concedes that nuclear has a heavy presence in the state, but fails to say what that means: that 47 percent of the electricity in the state is already emission free via nuclear energy (renewables add another 5 percent, so 52 percent total). Illinois has further to go, but a lot less than states that are not suffering those imaginary safety risks.

Anonymous said…
The same poll questions also contain pro-nuclear comments. Both types of comments are given as examples of what anti- and pro-nuclear advocates say. Yet you choose only to mention the anti-nuclear parts of the questions.
April 24, 2015 at 5:04 PM

Anonymous said…
The anti-nuclear statements in NRDC's poll questions which you claim bias its results are given as illustrations of the positions of those who oppose nuclear power. What you failed to mention is that each question also provides a pro-nuclear possible answer, with a pro-nuclear statement to support it. In other words, each question gives both sides. How is that a bias?
April 27, 2015 at 3:36 PM