By David Bradish September 16, 2007
Back in June 2007, the Blue Ridge Environmental Defense League along with Joseph Mangano released a report on the supposed “Health Risks of Adding New Reactors to the Vogtle Nuclear Plant.”
The report analyzed the 11 counties closest to the existing Vogtle reactors for infant mortalities and cancer deaths. Based on their findings, they have concluded that the two existing reactors would cause “over 500 excess cancer deaths in Burke County” over the projected 40 year license period. The report also states that “adding two new reactors could potentially double the total.”
The mortality rates the report cites comes from the National Center for Health Statistics of the Centers for Disease Control. The website with the data can be found here.
For my rebuttal, I only looked at the numbers for Burke County, GA (the county housing the Vogtle reactors). After corroborating the data for this county, I found so many incongruities in the analysis that I felt I didn’t need to look at any other counties.
To start with, I pulled the infant mortality data off the CDC website from 1979 to 1998 which the report cites on page 16. Only 11 years of data were available but were good enough to match the results from the report. Below is a chart with the number of infant mortalities in Burke County (data not available for ’84, ’92, ’94). 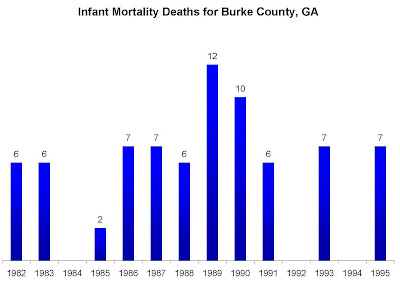 Below is another chart on the airborne emissions from the Vogtle Nuclear Plant based on the data presented in the report on page 7. According to the report, the emissions are “Iodine-131 and particulates, which includes all isotopes with a half-life of more than eight days.” 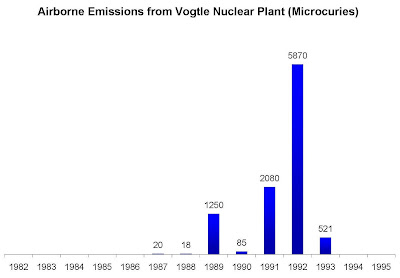 On page 16, the report shows the total number of infant mortalities from 1985-1987 (16), and from 1988-1990 (28). The change in the rate of infant deaths between the two periods comes out to 70.1 percent. But if you look at the chart and the rest of the data available above by year, the number of infant mortalities does not show much, if anything, of an increase after the start of the reactors.
It’s convenient how the data in the report lines up to paint the picture of correlation. But that’s all it is: convenient.
Here’s a list of some of the causes of deaths for the infants off the CDC database.

It's impossible that these could be caused by the effluents of the Vogtle plant. For some reason, though, none of these were mentioned in the report. I wonder why.
Moving on to total cancer deaths.
If the reader goes to page 21 of the report, they will find selective data on the cancer deaths from all ages combined. Again, the report chooses time periods which suitably fits the perception that the Vogtle reactors cause cancer deaths. Check out my chart below on the cancer death rates from 1979-2003. 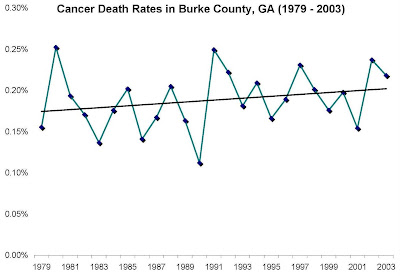 There is an obvious increase shown by the trendline in the cancer death rates for that specific period above. Let’s show only the years for the period displayed in the report (1987 – 1990). 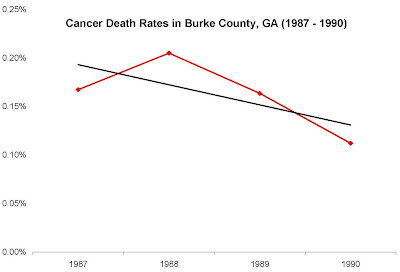 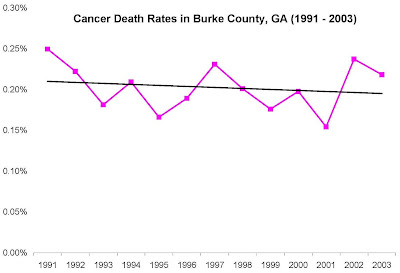 The chart also shows a declining trend for 1991 to 2003. What’s going on here? Cancer death rates for the selected periods are both declining, yet for the entire period (1979-2003), an increasing trend seems to be occurring. Well folks, that’s how you manipulate the outcome.
Page 21 of the report shows the combined rates of each period where the latter comes out to show there is an increase in the rate of cancer deaths. This data is correct. However, I’ve shown the same data broken out by year in a different light, and was able to show completely opposite conclusions.

Who is right then?
To find this answer, one needs to at least determine if there’s a correlation between total cancer death rates and total effluents from the reactors. By using Excel, the correlation between the years 1987 to 2003 comes out to 53.4 percent. This is a much higher correlation than the 4.2% found with infant mortality rates.
However, a 53.4 percent correlation is not enough. To prove there is some correlation between the reactors’ effluents and cancer deaths, the percent needs to be at least 80 and above. Some would argue it would need to be at least 90.
The report appears to have bypassed this initial screening, and moved on to data manipulation. The actual numbers are not wrong. As proved above, though, it just so happens that the authors were able to work the data to fit their presumptive conclusions.
For other debunkings on Mr. Mangano's dross click here.

Your rebuttal is a nice piece of work. The next question is how can we get it equal airtime?

Luke said…
Well, nice work on rebutting Mangano, but i'm afraid I have little else to say that you haven't already said.

There's something else, unrelated, that I'm interested in, however.

Reading Southern's page about the Vogtle plant, that you linked to, they're talking about capacity factors exceeding 100% - 100.37%, 102.4%, etc. I don't suppose you'd be able to explain what a capacity factor in excess of 100% means? Does that mean that it's operating at a power output exceeding designed output? Interesting.
September 17, 2007 at 11:47 AM

Anonymous said…
Capacity factors above 100% mean a plant is operating at effiencies above design. Reactor core power is maintained at or below the licensed power limit but, due to better than design performance in the plant equipment, a larger amount of electricity is produced. All this is a good thing, not a bad thing.
September 17, 2007 at 1:25 PM

Summer capacities are always lower than the nameplate and are generally what's used in all of EIA's figures. I've never seen capacity factors higher than 100% using nameplate capacity. One could argue which is better to use and I'm sure it could go either way.

But since EIA uses summer capacities, I'm sure that's what Southern is doing as well.

Anonymous said…
Capacity factor numbers depend on whether you're using reactor output in Megawatts thermal (MWth), or generator output in Megawatts electric (MWe). The relationship between the two is not constant, as it depends on the efficiency of the entire steam cycle, including rejection of waste heat to the environment. In some places (like the southern US), plants can operate more efficiently in winter than in summer due to changes in temperature, humidity, etc. That's why summer capacity is often slightly lower than nameplate. At one plant I worked at, that lower capacity was referred to as "Maximum Dependable Capability", or MDC. If your MDC is the basis for the capacity factors you publish, then it's possible to have annual capacity factors >100%, for instance if you have a mild summer and/or a longer, colder winter.
September 17, 2007 at 7:31 PM