On Hybrid Vehicles and Nuclear Energy, CNN Misses the Point 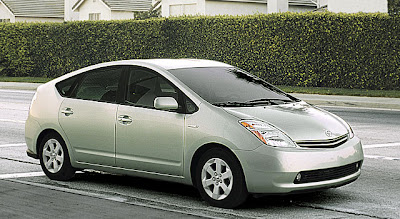 Over at CNN.com, Rachel Oliver is taking a closer look at hybrid gas/electric vehicles (like the Toyota Prius) and the impact they could make in helping to constrain greenhouse gas emissions. It's an interesting piece, but she gets one thing very, very wrong:

A US Department of Energy (DoE) study found that 73% of the nearly 217 million vehicles on America's roads could be charged with existing power plants to generate the electricity to charge the cars - and greenhouse gases would fall by 27% as a result.

The problem is, existing power plants often means coal or nuclear power, so "dirty" energy powering "clean" cars kind of misses the point. The DoE study also found -- not surprisingly - that particulate emissions would increase with the power grid having to charge all these vehicles.

Actually, it's Oliver who is missing the point. As we've mentioned time and again, nuclear reactors don't emit any greenhouse gases, so linking them with coal plants simply doesn't make any sense.

Then again, I guess I shouldn't be surprised. It was back in May that some of our own polling discovered that much of the public was unclear on the role nuclear energy plays in constraining the emission of greenhouse gases and other pollutants while providing reliable and affordable electricity.

Still, Oliver is a reporter, and really doesn't have any excuse for being this sloppy. Shame on her.

Anonymous said…
Perhaps it is NEI that has missed the point?

I can't speak for CNN--but it just might be that their definition of "dirty" power includes that growing inventory of more than 55,000 metric tons of high-level nuclear waste piling up at reactor sites, or the millions of tons of contaminated debris from future decommissioning operations that doesnt have anyplace to go and/or the millions of curies in routine radioactive released from operating reactors into the air and water. Maybe enough is enough?

Or maybe it isn't the radioactivity at all but those carbon emissions from nuclear fuel production? After all, its goes up as your finite source of high grade uranium ore is depleted.
September 14, 2007 at 4:35 PM

By the way Gunter, all these calculations were done using the Nuclear Fuel Energy Balance Calculator on a well-known anti-nuclear site. Odds are that the real numbers were better than that since not every separative work unit was done with coal. Feel free to double check my calculations.

Of that 55,000 metric tonnes, about 53,000 MT is unburned uranium that's about the same radioactivity as it was when it was mined out of the ground.

1500 metric tonnes are fission products, most of which have already decayed to stability and which will be at background levels of radiation in the next 200 years.

Finally 500 tonnes is transuranics, which could be destroyed in a fast reactor (generating more electricity) as well as producing more than 500 tonnes of uranium-233, which would fuel a fleet of thorium reactors indefinitely.

We can not only deal with "nuclear waste", we can deal with it in extremely attractive ways that FURTHER serve to solve the world's energy crisis.

Luke said…
Come on Gunter, you'll get nowhere trying to push rubbish like that to this audience.

Those thousands of tons stored at reactor sites - which are stored quite safely, isolated from the environment - are not "waste" at all, unless we let ourselves waste them. That's irradiated fuel, and 97% of it is valuable material, re-usable as nuclear fuel.

If we assume there's 55,000 tons of such fuel in storage, there's about 1650 tons of fission products in that fuel, the vast majority of which decays relatively quickly, with half-lives less than a year.

Some of those fission products are extremely valuable, rare metals such as Ruthenium. The destruction of Technetium-99 by neutron-driven transmutation has the potential to create significant amounts of stable Ruthenium-100. And this is radioactive waste? Certainly some of those fission products are moderately long lived radioactive waste, but not nearly as much as certain cargo-cult scientists would have each other believe.

30,000 people die prematurely in the US as a result of air pollution caused by dangerous fossil fuels.
Over the last 50 years since Calder Hall and Shippingport, how many injuries and deaths can you attribute - for real, with real facts and real data - to nuclear energy?

Does it take 60 years for cancer and so forth to show itself? Maybe it does - i'm not an oncologist. But we've been using nuclear energy now for over 50 years - Calder Hall actually opened in '56, Obninsk in '54, so we should be seeing people dropping like flies from cancer right now - shouldn't we?

How do the life-cycle emissions of nuclear energy compare to fossil fuels, and the other alternatives?

Can you provide some scientific insight into the subject?

At what Uranium concentration in the ore does the energy cost break even with the energy produced in the reactor? - (I'll give you a hint - it's below the average concentration of Uranium in Earth's crust...)
September 15, 2007 at 3:58 AM

Anonymous said…
This is totaly unrelated to hybrid vehicles. But a new article in the Lancet realy shows how much cleaner nuclear power is compared to any energy source.

Summer said…
Dealing with those dead set against nuclear energy is usually an exercise in frustration because they absolutely refuse to admit that technology moves forward. I know that is absolutely amazing in this day since the impact of technology has grown more and more over the past decade but yet, these individuals manage to do so.

Due to that,the nuclear power option can be a real hot potato and leads reporters to blunder, much like the one at CNN.
September 15, 2007 at 4:02 PM

thanks for the pointer. I'll check it out tomorrow when I have access to the journals.