The Senate Moves on the Energy Bill 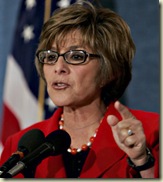 The Senate Environment and Public Works committee took up the energy bill this morning and honed in quickly on nuclear energy – honed in on it so insistently, in fact, that if President Barack Obama really wants bipartisan support for the bill – which squeaked by in the House – speaking out for a more prominent role for nuclear energy might be a way to achieve it. But Republicans, as we’ll see, were not the only ones positively focused on nuclear.

The panel included Energy Secretary Steven Chu, EPA administrator Lisa Jackson, Agriculture Secretary Tom Vilsack and Interior Secretary Ken Salazar. The latter two became a little stranded with only a few questions asked of them, especially Salazar, but these hearings tend to go where they will.

“Why are we ignoring the cheap energy solution to global warming, which is nuclear energy. If what we're really interested in is reducing carbon, which is the principle greenhouse gas, we could focus first on smokestacks and say let's start building a hundred nuclear power plants. … And then as we did that, we could begin to close dirty coal plants or … have clean coal plants or much cleaner existing plants.

“But,” Alexander continued, “for the next 20 years, if we really want to deal with global warming, we really only have one option and that is to double the number of nuclear power plants we have. There is no other technological way that we to have to have a large amount of reliable, cheap electricity other than nuclear power. So if we're in the business of saying, Yes, we can, if the President would give the same kind of aggressive interest to building 100 new nuclear power plants that he does to building windmills, we could solve global warming in a generation.”

“As we look at the the renewable energy alternative that are discussed, I'm very concerned that one of the most obvious sources of solution is largely untreated in the legislation that we expect to see coming to us and that is nuclear energy. … We cannot ignore what is probably the biggest piece of the answer and that is nuclear power. … We don't seem to see the kind of provision in proposed legislation that will truly help us expedite and move forward on these very significant answers, like nuclear power.”

And in a valuable show of bipartisanship, here’s Sen. Tom Carper (D-Del.)

Carper further said he was pleased by the number of new license applications submitted to the Nuclear Regulatory Commission.

You put a price on carbon, what you end up doing is sending a very strong signal in the marketplace that carbon dioxide emissions, that these kinds of emissions, are to be reduced in the future and that you move in the direction of technologies [in] which you do not create carbon dioxide – nuclear is one of those. So I hope that when we focus on the idea of having a cap-and-trade system, we focus on the idea that we are encouraging all  [emphasis, Udall] sources – whether it is the renewables (wind, solar, biomass, and geothermal) or whether it’s nuclear power. But we have to be really clear, I think, that our objective here is to do it all, to increase all the sources that are not contributing [to C02 emissions] and I think that’s a very important point as part of all of this. And I hope those of you that are here today on this panel will cover that side of it.

Lisa Jackson and Steven Chu responded to these comments, Chu with exceptional enthusiasm. While Jackson acknowledged a role for nuclear energy, she listed those who supported the legislation, finishing with, “Electric utilities support it because they know it will expand our use of reliable domestic sources of energy like wind, solar, geothermal and yes, safer nuclear power and yes, cleaner coal.” That feels a little grudging.

No grudge from Chu, though.

“The Department of Energy is doing with its tools everything it can to restart the American nuclear industry. With the loan guarantees, we are pushing as hard as we can on that. We are going to be investing in the future in bettering the technologies and quite frankly, we want to recapture the lead in industrial nuclear power. We've lost that lead as we've lost the lead in many areas of energy technology and we need to get it back.”

A very good showing for nuclear in the Senate and growing evidence that support for it is crossing the aisle.

One thing we have to note is that Barbara Boxer (D-Calif.) is an entertaining committee chairman. You’d value this if you sat through a few of these; they tend to the dry. Boxer isn’t putting on a show, she’s just sharp and engaged and keeps thing rolling along in good humor. Appreciated.

All the quotes come from my transcriptions. See here for the full hearing.

Marcel F. Williams said…
This is no times to play politics with America's energy future. Moving from a fossil fuel economy towards a nuclear and renewable energy economy is the only thing that's going to solve the US energy crisis and the world's climate crisis. Republicans and Democrats need to get together and do this.

And its also time for the Federal government to take full possession of the spent fuel from commercial nuclear reactors and place them on above ground Federally protected sites in safe storage cask until a decision is finally made to reprocess this material for more fuel. These Federal sites should be located in every State that is currently producing or has produced spent fuel in the past-- spent fuel. Its only fair!

Anonymous said…
It's economically cheaper to keep spent fuel in dry cask storage on-site for our operating reactors, since with license extensions they will run for many decades into the future, far past the time it will take us to develop the capability to recycle this spent fuel.

The federal government should demonstrate its capability to move spent fuel (to a couple of centralized sites) by cleaning out the spent fuel at the handful of decommissioned reactor sites we now have.