Czeching in on the Nuclear State of the Republic 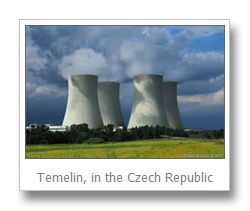 Poland cancelled the four plants under construction in 1990 but has committed to building its first plant by 2022. Romania has added two units to its Cernavoda facility. Hungary has extended the lifespan of its Paks reactor by another 20 years. Only Bulgaria has bucked the trend by cancelling a second nuclear plant at Belene in 2012.

When they broke away from Soviet influence in the 90s, these countries were running nuclear reactors built by the Russians. That they were Russian  weighed against them and that they did not have European support (and thus had to be closed for these countries to join the European Union) really brought an end to them.

The Czech situation, as described by Feffer, is indicative of how attitudes changed as Soviet domination faded into memory:

The issue of nuclear energy has been particularly contentious in the Czech Republic. The plant at Temelin [an RBMK-1000], which was planned by the Communist government, originally had the same design as the one at Chernobyl. It was redesigned to meet EU specifications. But many Czechs, including Vaclav Havel, still voiced opposition. Public opinion fluctuated considerably, from 53 percent against in 1999 to 64 percent in favor in 2000. The Czech government pushed forward with construction plans, negotiating around Austria's objections. The Czech energy utility is currently dealing with bids for an expansion of the facility.

The whole thing is worth a read.

Feffer includes an interview he did with Vladimir Prchlik, a former Czech Environment Ministry official. Prchlik, among other things, reduced the amount of brown coal used in the Czech Republic by switching to nuclear energy. I found the discussion about tilting technology decisions east to west especially interesting – it’s like threading a nuclear needle:

There was also a big discussion about atomic power. The reactor at Temelin was only part of it. The plant was built with Soviet technology. We switched many of the components of the reactor to Westinghouse. It was very critical to combine Soviet technology with American technology. Nothing could be changed in the agreements with the Soviet Union. … So, this kind of work required a lot of diplomacy and not just technical knowledge. A lot of work was about modernizing and achieving greater efficiency.

Josef Riha said…
There is much nonsense in the article. Temelin NPP has never been designed with RBMK reactors. Since the very begin there were planned construction of four VVER-1000 reactors (PWR type). Later in the 90th Czech government decided to construct only two reactors. The Westinghouse' participation contributed with I&C system+fuel (in 2009 the WEC fuel was replaced by Russian fuel). Replacement of parts of Russian reactor technology by Westinghouse's ones is an engineering nonsense.
March 9, 2014 at 3:04 PM