“Nuclear Generation is here and now.” 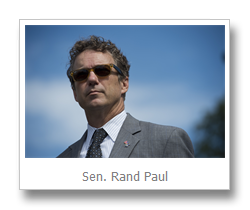 On Fox News Sunday, Senator Rand Paul (R-Ken.) said that this is what he would do to counter the Russians in Ukraine:


“I would do something differently from the president,” Paul said. “I would immediately get every obstacle out of the way for our export of oil and gas, and I would begin drilling in every possible conceivable place within our territories in order to have production we can supply Europe with if it’s interrupted from Ukraine.”

There are all kinds of reasons this is a difficult proposition. Paul says “I would begin drilling,” but all he could really do (as President) is open public land to drilling and then encourage private industry to do so. And then the market would decide where the gas would go. Politicians say all kinds of things with the intent of showing resolve rather than propose real policy, so there’s that, too.
But Paul might really be on to something. Forbes has an interesting article that has nothing whatever to do with Russia, but has the same impact:


Nuclear generation is here and now.
…
Major energy transitions are lengthy, says Michael Shellenberger, president of the Breakthrough Institute, in an interview. … “The right questions are how do we encourage a transition to it and how do we make it cheaper,” and not to dismiss it because of a stale mindset.

Writer Ken Silverstein shows how this is already happening in Europe and Asia.


Meantime, China, Korea, the UAE, Saudi Arabia and the UK are advancing nuclear production to address air pollution and climate concerns. China has 20 nuclear plants today and 28 more under construction — 40 percent of all projected new nuclear units, says the World Nuclear Association. A similar dynamic exists in the UK, which approved the construction of two reactors at Hinkley Point that will provide 7 percent of the UK’s electricity.

The beneficial aspects of this are manifest. Paul and other politicians often zero in on fuel types to promote energy policy, but that’s not all there is on offer. America has nuclear technology, nuclear manufacturers and nuclear personnel. The U.S. is  not a big supplier of uranium, but “good actors” like Australia are.
It takes time to build nuclear plants, but, as in the U.K, it takes no time at all to set an energy policy – well, okay, it does, but it can be done quickly – and energy policy that favors nuclear energy can benefit the U.S. right away. No need to drill everywhere if it proves to be a problem – nuclear is all ready to go. Even Sen. Paul might find it appealing.

Anonymous said…
With more nukes, the US could use the gas and coal it wastes on electricity generation to synthesise oil. The technology can be bought from South Africa. This would certainly cost less than the Iraq and Afghan wars. Entertainingly, Qatar is building a gas to oil plant to make better use of its plentiful supply of gas. The nukes the UAE are building will also allow them to export more fossil fuels to those who prefer them to nuclear power!!
March 11, 2014 at 8:45 PM

Anonymous said…
Nuclear + Electric Vehicles (batteries) + Heat Pumps are going to eliminate the majority of fossil-fuel use in this century. These are not pie-in-the-sky technologies. They are very close to implementation. Battery research has really accelerated (finally). Nuclear is ready now, with more advanced designs in the wings. And Mitsubishi is selling heat pumps at Home Depot that are rated down to -14 F.
March 12, 2014 at 12:39 PM