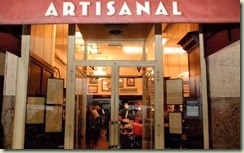 While reading an article touting the benefits of thorium as a fuel for nuclear reactors, author Pascal-Emmanuel Gobry veered into this paragraph:

Within the energy analysis community, nuclear advocates are one hipster subset. But as always when we're talking about hipsters, there's a subset within the subset. And these energy hipsters are pushing a nuclear technology that has all the advantages of traditional nuclear and none of the drawbacks. Its name is thorium.

So does this mean that thorium powers artisanal nuclear energy? Must the operators (men and women) grow elaborate beards? Gobry zooms away for this idea about as fast as he had it, but we find the idea of thorium fans as a hipper-than-thou cohort of already hip nuclear energy advocates weirdly appealing as well as weird.

But not necessarily without serious support, though from the least hip group imaginable:

China is developing a new design of nuclear power plant in an attempt to reduce its reliance on coal and to cut air pollution.

In an effort to reduce the number of coal-fired plants, the Chinese government has brought forward by 15 years the deadline to develop a nuclear power plant using the radioactive element thorium instead of uranium.

Uranium does this, too, so why the push for thorium?

China has been importing large quantities of uranium as it attempts to reduce its reliance on fossil fuels. However, according to the WNA, thorium is much more abundant.

Uranium is also abundant, though there is about four times more thorium in known deposits. This is potentially very important to countries both interested in energy independence and and with large supplies of the element – China is one example, India another.

When the thorium fuel cycle was first explored in the 60s, it was seen as a complement to uranium (or the other way around) because, while fertile, thorium is not fissile, so (very simplified) it is used in conjunction with isotopes of uranium or plutonium to produce a fissionable isotope of uranium. That said, many reactor types can accommodate thorium. That’s simplified, too, since all the processes necessary to provide usable thorium fuel must be accommodated, too.

The International Atomic Energy Agency has a very detailed paper on thorium here. Worth a read for the thorium curious.

Thorium fans can be very partisan (and have elaborate names, apparently, such as Pascal-Emmanuel Gobry): Here is Ambrose Evans-Pritchard on the Chinese ambitions in The Telegraph:

Thorium may at least do for nuclear power what shale fracking has done for natural gas, but on a bigger scale, for much longer, and with near zero carbon dioxide emissions.

We like the sound of that, even if it’s largely puffery. The economics are tough to know right now.

China’s thorium drive is galling for the Americans. They have dropped the ball. As I reported last year, the Oak Ridge National Laboratory in Tennessee actually built a molten salt thorium reactor in the 1960s. It was shelved by the Nixon Administration.

Galling for the Americans? Well, if you see the world from this angle, perhaps. A little more about what the Chinese are doing:

The project began with a start-up budget of $350m and the recruitment of 140 PhD scientists at the Shanghai Institute of Nuclear and Applied Physics. It then had plans to reach 750 staff by 2015, but this already looks far too conservative.

The Chinese appear to be opting for a molten salt reactor – or a liquid fluoride thorium reactor (LFTR) — a notion first proposed by the US nuclear doyen Alvin Weinberg and arguably best adapted for thorium.

So, even if we find the idea of artisanal nuclear energy a bit of a heavy lift, it does fit into the so-old-its-new branch of hipsterism if without an ironic overlay. If that’s what it takes, that’s good enough for us.

Robert Hargraves said…
My article with Ralph Moir in American Scientist sparked China to invest $350 million in developing a thorium molten salt reactor. This week China announced it is speeding up the development work. This week Amazon published a German version of the book

Jaro said…
The same source, Li Zhong, was quoted in similar reports that "This is definitely a race…. China faces fierce competition from overseas and to get there first will not be an easy task" – in reference to “an industrial reactor using thorium molten-salt technology.”
Would someone at NEI happen to know who this “fierce competition” might be coming from? …we know it’s not the US or France or Russia.
Is it possible this might be something similar to the movie?
http://en.wikipedia.org/wiki/Fierce_Creatures